Maybe I should’ve renamed the article “This Week in WooHoo Games: The Sims”.

I’ve loved The Sims since getting the third installment on Xbox 360. I’ve always been a designer at heart, so to have a second life style of game and mixing it with a relatively good creative system, I had a blast playing through my various Sims’ lives. There was even a point where on the PC version of Sims 3 with all the mods I could add into the game, I attempted to create an entire town with customized character from various video games and anime. The possibilities with the series are endless, albeit depending on your own levels of creativity.

But enough praising the game, let’s do what we’re supposed to be doing here and getting to the WooHoo details!

There’s a certain charm to the graphics style of The Sims when it comes to the character design. It’s like a mixing of anime beauty with North American 3D gaming graphics and it gives your Sims a very distinct beauty to them. And the idea that you can create the perfect Sim (to your own personal tastes) just increases that. Whether you like a jacked-up guy, a punk rock girl, or whatever floats your boat, you can do it, especially on PC where there are tons of people making more clothes and other mods that can change the look of your Sim to whatever your heart desires.

Before I got deep into the PC modding scene of The Sims, I was playing the Xbox 360 copy of Sims 3 and was immediately drawn towards Rain Leary, the punk rock looking teenager in the default setup of the game. When you play a game like The Sims, you often find yourself putting your own stories and dialogue into the life your character is living, so having my character grow up chasing this lovely tomboy, there were struggles and there were great memories. From the many tough days at work, the tons of broken appliances and especially the heartache of Rain losing her mother, there was that big moment that changed the entire landscape of their lives.

~As told by my character, Sion Alexander:

While at a huge party with all my co-workers as a rock star, Rain actually showed up (she was usually busy those days) and we started talking. We were best friends at the time, a result of me keeping Rain happy through her worst of times. But then after all the compliments and a little flirting, I went for it and tried to get a first kiss with her…and she returned it! The following day, I was off work and I invited Rain back over, just the two of us. It was a lovely evening, a nice dinner, a little hot tub conversation and then snuggling up on the couch watching TV. When the clock had struck 11, my usual bedtime, I thought “No! I don’t want this night to be over!”. And it didn’t. Out of seemingly nowhere, I found the courage to ask her if she wanted to move our cuddle-fest to the bed. Maybe it was courage, maybe it was downright stupidity, I was sure she’d be spooked and leave, maybe we wouldn’t talk for a while after this. But she said yes and we lied there together for what seemed like hours, but was only a matter of minutes.

And then I had my first…my first WooHoo.

It still sounds hilarious to me calling sex WooHoo, but given what the animation makes it look like (and sound like), it’s probably the right term. Looking like a game of Whack-A-Mole with a ton of giggling, WooHoo is so harmless that I’m pretty sure it’s only a T-rated game because it’s a sexual innuendo, I can’t imagine any child suddenly becoming a sex fiend because of such a childish looking animation. Granted there are mods that turn WooHoo into full on sex though, which brings us to the modding scene of the series. 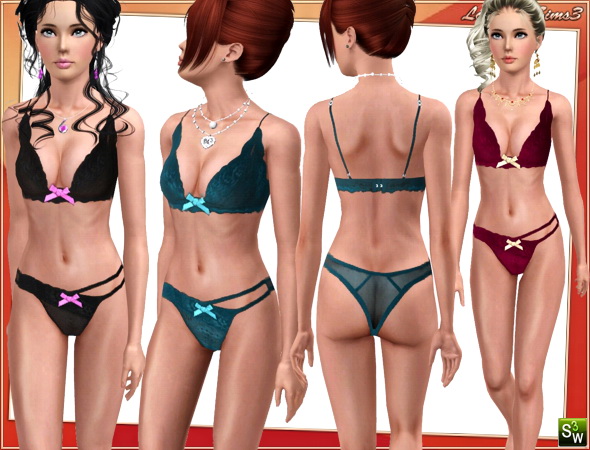 I suppose I should start by answering a question: What’s the highest level of sexy mods I’ve used in The Sims? The farthest down the rabbit hole I’ve gone was removing the blur from showers and such and adding nipples to the females. There’s far more I could’ve done, like I said there’s full-on sex mods for The Sims, which includes stuff like full nudity for women and even a penis mod for the males. But no, I stuck to just a Ken doll and a Barbie doll with drawn-on nipples.

I remember having the conversation a couple years ago with a friend who also played The Sims and removed the blur. We both agreed that there wasn’t a whole lot harmful about removing the blur, but are also aware that if there was no blur, even with no female nipples or any genitalia showing, the rating would’ve probably been bumped to a M-rating and that would obviously not fly for EA. But for us, who were over the age of 17, we were sure that even if we were 13 it wouldn’t be that big a deal. Generally speaking, by the time a boy or girl has hit 13, especially nowadays, they’ve either come across someone their age or older naked or have seen pictures online. It’s nothing new and at the bare minimum, removing the blur like I said earlier just turns them into naked Barbie/Ken dolls and how many of those were lying on children’s bedroom floors completely devoid of clothing?

And then there’s the ton of clothes that people have created over the course of the games that increase the possibilities you can create style-wise for your character. What that also brought too, was a ton more options to make your male and female character just a little sexier. The default options were pretty good for that, there were a fair amount of swimwear and underwear that felt into that realm, but the mods just blew it out of the water. You would see a lot more risqué outfits, branded underwear and swimwear and of course far more thongs, because that’s just how the internet modding scene works. If you’re not taking all the clothes away, you’re cutting as much fabric as possible. And in terms of the game, I think that’s fine, it’d be weirder in a game like say Skyrim where let’s be honest, bikini armor is not that useful. But if it fits your character, a thong is fine, including on male characters, there’s nothing wrong with it.

In terms of sex, the game does pretty much everything it can while keeping a T-rating. After that, the modding scene which is unsurprisingly strong with this series can easily adjust it to become a more mature game for those who don’t mind a little sex and can see the differences between reality and fantasy.

So I’m going to leave this article with a story, an interaction I had with a parent about this game:

I still remember it vividly. Being at my local EB Games, just looking around for a new game to grab and divert my attention for a little while, when I suddenly heard a woman giving the lone employee there a really hard time. She had bought her 9 year-old boy The Sims 3 on Xbox 360. 9 years old.

So let’s take a look at the ESRB rating, shall we?

Does this look like a game for a 9 year-old? Not really, the rating is justified and if parents and this specific mother actually bothered to do her five seconds of due diligence, she would’ve noticed this. After ripping the salesperson a new asshole, who was clearly shaken up by this, I approached her and asked the simple question: “Did you read the rating on the box?”, to which she got all triggered that I dare ask her a question and shouted “I shouldn’t have to! That’s the salesperson’s job to tell me these things!”, to which I admittedly laughed at her. Because it’s not their job to tell you anything because as far as they know, they see you buying the game (I got her to admit she bought the game without her child with her) and when you look definitely older than 13, they’ll ask zero questions. It is your job as a parent to look into anything and everything your child consumes, it’s also your job to identify if your child can also handle the content, even if he/she is younger than the rating, some kids are a little brighter and can understand the differences between fantasy and reality.

And if you can’t take five seconds to read a label that says the game is for people over the age of 13 and contains sexual content (because sex is apparently too much for parents to talk to their kids about when they’re older), then you kind of shouldn’t be a parent. Because you clearly aren’t capable of the responsibilities required to be a good one.