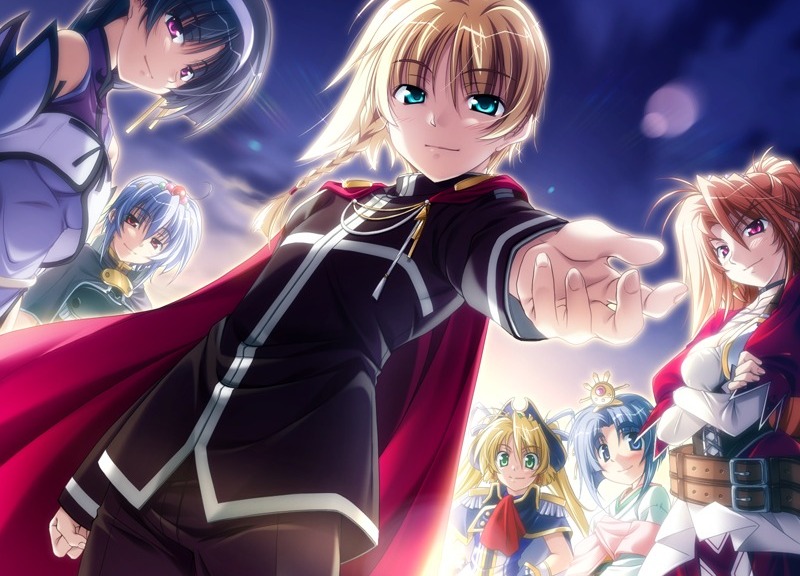 Come on now, you didn’t think I’d have a weekly article devoted to sex in games without having a few 18+ visual novels in there, did you? Especially after yesterday’s article on visual novels. So what better way to kick off the first visual novel in these weekly editions, than with my personal favourite, Princess Waltz.

Princess Waltz on paper seems like a standard fantasy visual novel. It actually reminds me a lot of the basic plot Queen’s Blade employs, the idea that several women battle each other in an extravagant tournament to gain the hand of the Prince and in the end, have full reign of the kingdom of Eldhiland. The entire story as a whole, is actually pretty decent all things considered. But when it comes to this game, the story is not what really got me and made this my favourite visual novel I’ve ever played. It’s the phenomenally well-drawn artwork and the cast of characters.

Putting Arata aside, since he’s your standard male protagonist, we start off with what storywise is his likely love interest by the end of the game, Chris. She falls into that group of characters I always tell you how much I enjoy them, she’s a girl who spends the first portion of the game dressed as a male to disguise her gender. There’s a much more in-depth reason for it, so without spoiling it, let’s just say it goes a little further than just being looked at differently as a girl. Chris as a character though has the best transformation over the course of the game. She starts off super perfect, super innocent and a little snobby. The longer she and Arata are around each other (for special reasons), you begin to see her slowly drop all those perfections and eventually drops the regal act and in a rather “surprising” wake up call, she’s almost forced to drop it as well. When she lowers her shields so to speak, she’s a wonderful girl, comes off like a best friend. Though I will admit, she’s at the bottom of the totem pole when it comes to pure attractiveness. Either that or her scenes (in terms of the artwork) just weren’t as good as the rest, could be that. Also, I could talk about Iris, who’s the transformation between Arata and Chris, but it’s too weird to explain so long story short, a boy and a relatively small-breasted girl, both with short hair combine to form a blonde warrior with long hair and big tits. Told you it’s a weird one to explain.

Suzushiro is purely adorable, there’s nothing more to it. And yet she’s probably the most dangerous of the all the girls once you get her riled up. Yes, the picture is pretty much her going Super Saiyan, it’s badass! And strangely sexy. When she’s not fighting, there’s no one more reserved and quiet as her. At the beginning of the game, if you’re not Chris, Suzushiro has zero time for you, you’re lucky to get a hello from her. But as the picture suggests, you don’t ever piss this tiny girl off, because once you get her angry, there’s no stopping her. She’s got a temper on her when you cross that line, but the other 90% of the time, she’s your perfect wife kind of character, if she’s interested in you of course, otherwise you’re not even aware she exists.

I swear, it’s the crazy ones I like the most. Angela is my easy #1 choice in this game for the simple reason that if you can somehow find a way to get close to her (without her skewering you with that lance and that’s a 99.9% chance of happening with you), she seems like a super cool girl to be around. And come on, she’s smoking hot! Her scenes were easily the hottest, her outfit’s actually the most elegant for someone who’s definitely the most sadistic and because it’s a Sexy Games article, she’s definitely the hottest when their Princess attire is gone, as seen here from her battle with Iris. Angela is just absolutely stunning and a case where I’d risk my own safety trying to get near her. Of course I’d approach her when she isn’t holding that giant lance. I like not having holes in my chest.

That picture pretty much describes Liliana to a tee. She’s the super bubbly girl who happens to be a pirate Princess. Her weapons are pistols, she has a mini killer whale mascot floating around (its voice is super cute) and she herself is super freaking cute. She’s admittedly a bit much at times, but when she’s not on a sugar-fused hyper trip, she’s actually a very nice girl, a lot of insecurities behind that bubbly personality of hers. Her scenes are very good, I’d easily put it second, behind Angela’s. And in battle, she’s no slouch, although regardless I’d still put her as the least dangerous of the six fighting Princesses. Although being 6th in this case doesn’t exactly mean she couldn’t whip your ass from the Pacific to the Atlantic.

The only non-Princess in the Princess Waltz (she’s the one who made the armor and the Princess intended for it was disqualified), Liesel until the sixth Princess is revealed is the odd one out of the group. It’s mostly her own choice, she comes off as a bit of a loner and when you know who she actually is behind the cold exterior, it makes further sense. In terms of her looks, she’s in the bottom half for me, though again that’s not a bad thing, just such good competition. She’s got the biggest breasts of the series, though they’re not too big, unlike the usual girls of a series who share that award. Although her scenes, like Chris’ are not nearly as good as say Angela’s and Liliana’s, they pretty much just serve to accentuate her chest, which is a shame cause there’s a lot more to her than just her bust. Regardless, she like the majority of these girls is a really nice girl once you get her outside of the tense situation that is the Princess Waltz. Alone with Arata, she’s very shy, most likely due to her loner nature, but she comes off like a real sweetheart.

Shizuka is the odd one out here, due to a multitude of reasons. She doesn’t show herself as the sixth Princess until the very end of the game, you have to choice a very specific set of circumstances to even have her acknowledged by the end, let alone access to her scenes. It’s also a bit of an odd pairing if you end up going that route, as Shizuka (can’t remember if by blood) is Arata’s sister. But that aside, she is a very gorgeous woman, she kind of gives off a Chifuyu (Infinite Stratos) vibe with me, which considering Chifuyu’s high on my list is good for her. You have to put her Princess character aside though as her character there is very beast-like, otherwise she’s super attractive. The only problem is she suffers through something in hentai visual novels that I don’t like at all, ripped pantyhose. I prefer bare legs or just socks on, never understood the whole ripping pantyhose to reach your objective thing.

So just for the sake of having fun, here’s my personal order of the six girls you can choose from in this game:

Another thing I love about this series, is that while the in-game artwork is fantastic, there’s an even more amazing set of artwork created along with the game. Whether it’s Angela in a cute nightgown, Suzushiro at the hot spring, or Shizuka and Chris hanging out by the pool, the official artwork is absolutely stunning and shows off these beautiful women even more than the game already does, which is incredible and seemed impossible to me at the time I found these pictures after playing through the game. I find the artwork as close to perfect as I can ask for. Nothing’s really over-exaggerated, over-sexualized (compared to your average series) and the art has a perfect balance between being cute, being sexy and being beautiful. And like I said, there isn’t a girl with gigantic breasts, the girl with the biggest bust, Liesel is probably equal to your average anime girl’s bust size. They’re more realistic, plausible if you will.

The story like I said isn’t anything crazy to go for, it’s no Snow Sakura for me. But it’s enough to stay interesting and when the cast of characters are all as interesting as they are, an okay story becomes a good story. I didn’t talk about the gameplay much, because it’s a really basic card game and honestly, I played it on Easy so I’d get through it quickly, I would’ve turned it off if I could have.

If you are old enough, and I mean to handle it, I can’t say you can’t play until you’re 18, cause I didn’t wait, Princess Waltz is actually a pretty decent game. Obviously for me, the characters and the artwork struck a chord and it’s been my favourite eroge visual novel for almost 10 years now. Granted, I haven’t played a crazy amount of them since I played Princess Waltz, but to still be fresh in my head all these years later is a pretty big accomplishment. So check it out if you’re interested!