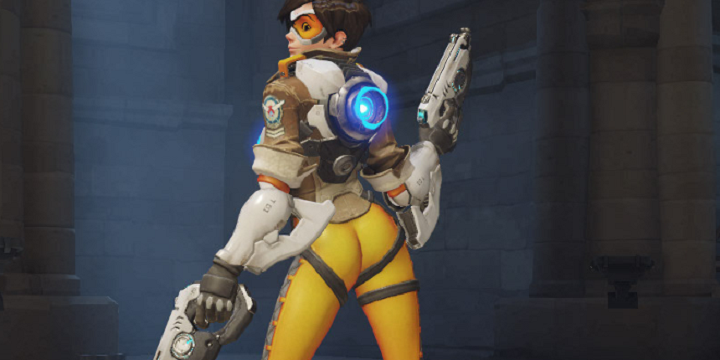 I haven’t played a second of Overwatch yet, I just want to make this clear. I’m going based on what I’ve read about her and the entire situation. Hence why this’ll be a quick one.

Basically what I understand is that Tracer is a young, spunky girl who wears tight pants. People initially were hesitant with the choice of outfit for her and then when the pose pictured above starting floating around, a user on the game’s forums made a post about their displeasure with the pose while actually giving some fair points about her character and other female characters being more sexual than Tracer was. I get it, you don’t like the fact that this character is posed a bit sexually because you view the character as one who isn’t meant to be that sexually designed.

Here’s where I have a problem with that: Who are you to decide that? That’s up to people who designed this fictional character. Now the developers have also come out and said they had a second pose as a backup as they weren’t big fans of the “butt pose” themselves, which honestly I call bullshit on that. If you had a backup pose because you weren’t too thrilled about the first one, why didn’t you start with the backup pose? I think someone above them caved in and told them to make the switch and lie about the second pose, honestly. That’s my opinion, I’m probably wrong, but that’s my current feelings on this.

And to sound like a broken record, the character isn’t real, why is this that big a deal? And once again, I’m sorry to spoil this for all you SJWs and feminists out there, but…girls have butts. That pose Tracer is in is a very basic badass pose, but because she’s wearing tighter pants (which I’d like to think she chooses to wear because it gives her freedom of mobility) and again because girls have much more defined butts than men, it’s a bit more exposed and defined in such a pose. This isn’t an uncommon pose, you’re just getting all triggered because a girl’s buttcrack is showing. Grow the fuck up.

I’d like to think this is a nothing story, but for me it’s another case where I think people are trying to shove their own views and opinions on others. I don’t know how many times I have to say this, but if you truly want this kind of content to stop, don’t partake in it. Don’t buy or play these games. If the sales reflect that sexual content doesn’t sell as much anymore, companies will tone it down. Games like DOA Xtreme 3 exist because there is a market for it. I’m sorry but if you want your pro-feminist games to be major releases, you have to buy them and developers have to make them less boring and shit. That’s how real change is going to happen, not some jackoff bitching on a forum page.

And seriously, Blizzard: Grow a fucking pair, will ya?

One thought on “Quickie: Tracer’s Butt Gets Censored”