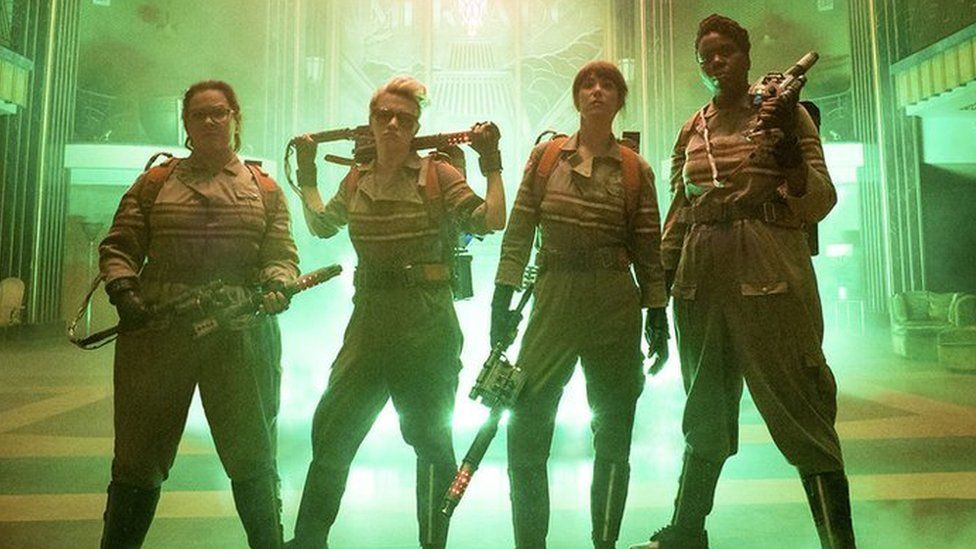 It’s only been two months since the first trailer for the Ghostbusters remake was released. Feels like it’s been much longer than that, but sure enough, March 3rd it came out. Man, I feel like I had another birthday since then. But I still remember exactly how I felt the moment I finished watching that trailer for the first time:

“What the fuck did I just watch?!”

Fast forward to today, the trailer has 29.5 million views and the thumbs up, thumbs down ratio is to 3:1 in favour of thumbs down. At the moment I’m typing this out, the trailer has 590,000 dislikes and 210,000 likes. That’s made the trailer the most hated trailer of all-time on YouTube. Normally it wouldn’t go any further than that, just the old “Man, that’s crazy!” kind of writing. But ScreenCrush decided to take a different stance on why the trailer has had such a negative reception as seen in the article here:

Yes, ScreenCrush, every single one of those thumbs down is ONLY because the remake is an all-female cast. Bravo, ScreenCrush, bravo! You’ve cracked the code! Congratulations!

…SERIOUSLY, ARE YOU THAT FUCKING RETARDED?!!!

Do you truly believe that the negative reception of this film is solely on the shoulders of a misogynistic, sexist mindset?! How did you come to such a short-sighted conclusion?! Let’s put the girl power stuff aside her, let’s look at the trailer as if the cast was actually all men and how people would react to it.

First of all, every joke in the trailer is not funny. The only time I even cracked a smile was the moment Kate McKinnon was hiding in that shelf of mannequin heads with that crazy face, which I admit I’m a sucker for. But aside from that moment, it was all dull, the ghost puke was childish, the Hurst car joke fell flat (pun completely intended), the slapping of Melissa McCarthy, all of it was dull and unfunny. The animation and special effects are also childish, looking more like they belong in those live-action Scooby-Doo movies than a 2016 Ghostbusters remake. The original 1984 special effects still hold up today and I’d argue the look better than what the remake is offering. The music in the trailer was terrible, dubstep needs to stop being remixed into classic music tracks, just stop it!

Oh! And most importantly…for a movie that’s supposed to be progressive…WHY ARE ALL THE WHITE CHARACTERS SCIENTISTS AND THE BLACK CHARACTER ISN’T?!!! Racist, much? And don’t give me the “Well the non-scientist character was black in the original!” bullshit, they changed the cast to an all-female one to be progressive, what would’ve been stopping them from having one of the scientist be black? Hell, why can’t we have an Asian or Latino character in there too? Seems like we only wanted to check one box and high-five each other for being so progressive while simultaneously ignoring everything else.

I could go on even more about it, but that’s the biggest problems I have with the film. Now here’s where I put the final nail in the coffin, the reality of how fans would truly react to a trailer like this: If the cast was all-male, instead of the likes/dislikes being 210,000 to 590,000…it would be more like 50,000 to 750,000. Don’t act like if the cast was male that people would be nicer to the film, I guarantee you the majority of those thumbs ups are from feminists and SJWs trying to defend a movie solely on the basis of an all-female cast.

This happens constantly in entertainment, if something that’s mostly female driven fails, the sexism and misogyny excuse gets brought up. I mean, let’s not bring up how both Star Wars: The Force Awakens and Star Wars: Rogue One both have very little dislikes in their respective trailers and you know the fan base for that film series is far more harsh than Ghostbusters. Those two movies have female leads, hell the two main characters of Star Wars: The Force Awakens are a woman and a black man, yet the dislikes are extremely low. You think that fan base wouldn’t have hesitated to slam the film if they thought it was bad? And you know if they did, the sexist card would’ve been pulled out for that too.

The Ghostbusters film isn’t hated because the cast is female. It’s not because women aren’t funny (though I personally think Melissa McCarthy is super overrated, but I love Kristen Wiig and Kate McKinnon), it’s not because we wanted the remake to keep the all-male cast. Honestly it’s very simple: We didn’t want a remake at all! The 1984 original was perfect, it’s why movies like Back to the Future shouldn’t be remade, they were perfect, why fix what isn’t broken? Why change what’s already loved? Ghostbusters is a movie no one wanted to be remade, if anything they wanted Ghostbusters 3 and that’s no longer possible now with Harold Ramis’ passing in 2014.

But most importantly, we hate the trailer not because the cast are all woman, BUT BECAUSE THE TRAILER IS SHIT!!! The jokes aren’t funny, the special effects are childish, the movie just isn’t going to be any good!

Stop trying to find alternate reasons to suit your cause, to check off the boxes that start your SJW crusades. Just accept the fact that a movie that maybe had good intentions and maybe tried to create a faithful re-imagining of an 80s classic…failed! And when people see something they don’t like, they’re more than happy to show it.