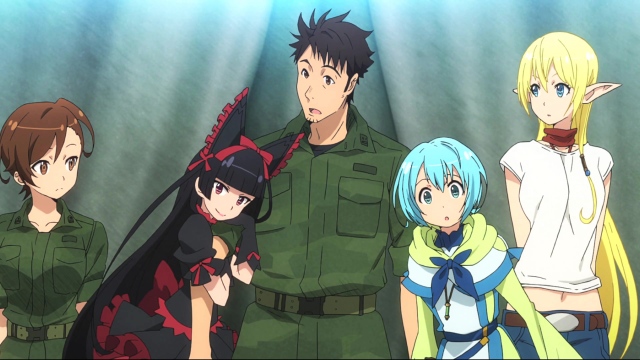 When I first read the concept of GATE being a show about what would happen if a magical portal opened between the real world and a fantasy otherworld, I was interested right from the very start. However, my thoughts on a show like that, especially after seeing the trio of girls in Rory, Tuka and Lelei, I fully expected a funny, over-the-top harem sort of anime.

What I got was nothing I would’ve ever expected. I got a realistic representation of what would actually happen if such an event ever occured, ranging from political struggles, hardships in adjusting to the new world and of course, the real world with current technology completely decimating the fantasy world with incredible ease. And every episode of this two season (so far, though the end of Season 2 kind of makes it seem like that was the end) was an absolute blast to watch. 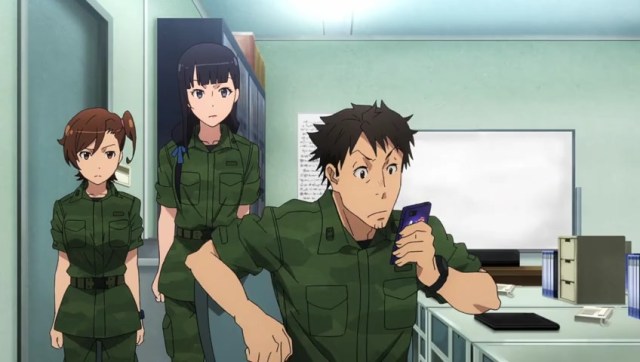 The main focus in the show is on Youji Itami, a 33 year-old who is a First Lieutenant in the military. However he’s not your typical military man, he merely works there as an income provider, particularly for his otaku interests. Which of course after the beginning of the anime when the Gate opens and the fantasy world attacks first (which is never really explained why they struck so fast and immediately, not to mention the Gate’s origins), he gets a much larger workload, put in charge of the new JSDF which is the first unit sent into the “Special Region” aka the other side to explore the world and ensure the protection of Japan from that side.

The majority of the entire show is spent in the Special Region as is a phenomenally beautiful world, full of life, interesting architecture and of course a ton of lovely ladies for those attracted to women, aka the target audience with this show. There are a couple episodes that take place in the real world and are just as insightful as you watch the girls from the Special Region being blown away by the technology we have today. I wish there was actually a little more of this, perhaps an OVA at the end of Season 2 where some of the newer characters are also exposed to the real world, I would’ve liked to have seen that, as the only times in Season 2 we see our world is when politicians are arguing. 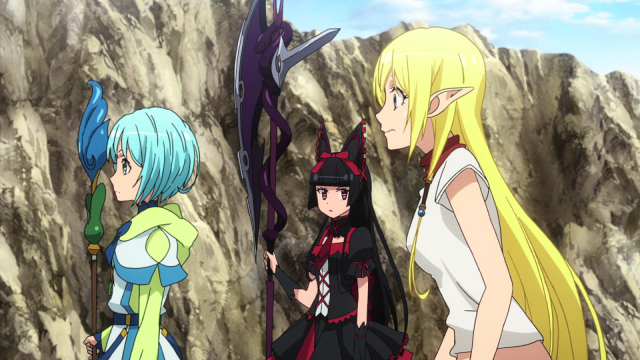 The biggest positive I have with the show is the design of the show. The contrast between the military which is a boring green and brown set of colours being mixed with the absolutely vibrant colours of the various people of the Special Region, the dragons, the buildings, it’s such a great mixture and really defines the character sets. You immediately know who’s from the JSDF and who’s not, there’s no confusion with the massive amounts of characters throughout the two seasons of the series. The vibrant colours are beautiful, each major character in the special region is unique, unmistakable and beautiful in their own right. Tuka is a gorgeous blonde elf, her beauty literally shines throughout the series. Lelei with her lighter blues and greens really has her stand out, as if her various magics doesn’t already. Rory being the dark reds and blacks separates herself from the other two girls as the much darker and more violent of the three, being a demi-goddess of war essentially. And to add a couple more, you have Pina Co Lada (yes that’s her name) as the Princess of the Empire stands out with her bright red hair and shining silver, red and gold armor. Lastly, Yao easily stands out being a dark elf with the darker tanned skin and silver hair along with her purple and black outfit. Each character has a very unique colour palette that makes them easy to recognize amongst the others, something very important when the show has as many characters as it does. 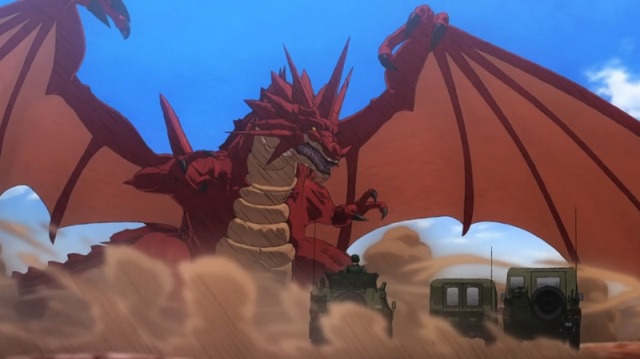 But the one thing about the show that you can’t ignore for doing as well as does, both in writing and visually, is the simple fact that the Special Region is a world reminiscent of the medieval era, while the JSDF comes from the present day. And this is exemplified through the various battles in the anime. Right from the very start, while the fantasy world attackers kill a number of innocent civilians, it’s only by the factor of surprise and people being unarmed. Once the military gets involved, it’s a no chance in hell situation for them. Guns alone solved pretty much every problem, it cut through their armor, killed their soldiers in an instant, dealt with the various creatures that spilled through, it was a slaughter. Couple that with the military counterattack in the Special Region where tanks get involved and you watch 10,000 soldiers die in a matter of minutes by these tanks. It’s a clear cut reality of what would happen, it doesn’t matter the kind of magic this world could have, they’re no match for modern weaponry, even a massive dragon, though the dragon can at least put up a fight.

Speaking of the dragon, it’s truly the only time in terms of a battle that the JSDF are ever challenged, at no point during the entire anime do you get the sense that the Empire stands any chance of even putting a dent in the JSDF’s forces. Whenever they try, they’re decimating in minutes through gunfire, hell the main villain of Season 2 gets his ass royally kicked (pun intended since he’s the Prince) by Shino, a female soldier. But she’s well-trained in hand-to-hand combat and takes him down and leaves him a bloody mess in moments. Perhaps their could’ve been a point where someone like Itami could’ve been threatened if he was unarmed, but with military training, such a moment just doesn’t occur. It’s to the point where Pina and the majority of the Empire pretty much realize that if the JSDF wanted to, they could wipe them completely off the map and there’s nothing they could do about it. It’s a scary reality if such events happened. Another curious part of the show is the political struggles within, though Season 1 is the only one to really explore that. It’s a great representation of what would also happen if such a world existed, while Japan is where the Gate is, other countries want to get in there as well for their own reasons. And yes, a major reason why the Americans want into the Special Region is the potential of oil, how fucking realistic can you get beyond that? It’s very interesting to watch unfold as various countries make their attempts to intervene in the JSDF’s process of peacekeeping in the Special Region, for whatever reasons they have. It’s also interesting to watch how some of Japan wants to go all-out on collecting resources, while others who are actually inside the Special Region are more interested in just collecting more renewable resources.

I have my own thoughts on what should have been done and my primary idea is a foolproof one. Create far more farmland, increase the amount of food we can produce as there’s so much open land in the world. Not only that, but you don’t have to bring people into the Special Region, you can take in the poor and unemployed people of the Special Region and teach them how to work with the equipment we use today. Also and this may sound bad, but we wouldn’t have to pay them as much either, given their economy would be so vastly different to ours in terms of what’s worth more. If we could do such a thing without jobs being eliminated in the real world (which is the only thing I’d worry about), we can increase our food production alone and in turn lower prices further on food while simultaneously creating possibly new foods we’d never had before from the Special Region. 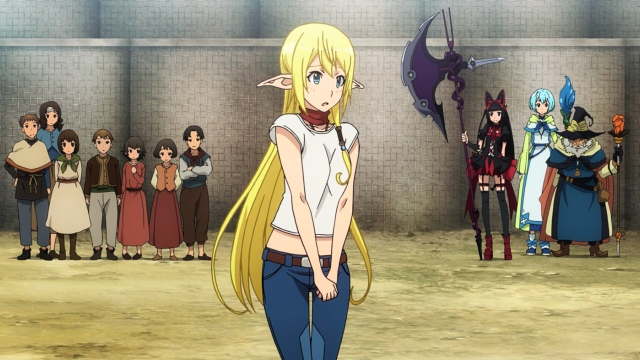 There so much more I could talk about, but in the interest of keeping this article not too long, here’s a few quick things I have to add in there. Of course the idea of the end of Season 2 featuring relationships formed between those between the two worlds had to happen and I’m glad it did, making things more interesting for a third season if one should happen. Tuka’s insanity in Season 2 is an extremely dark and real story of the mental state some people actually go through during the mourning period after the loss of a loved one in such a violent, shocking event (she’s the lone survivor of a village after a Fire Dragon attack). I’m disappointed on how the second demi-goddess to be introduced after they defeat the Fire Dragon becomes a nothing event after that episode, I thought there was actually a chance of someone able to go against the JSDF but nothing comes of it. Lastly, I’m really happy that while the show does feature a lot of beautiful women, it doesn’t go out of its way to have a ton of blatant ecchi imagery, there aren’t a ton of panty shots, there’s no swimsuit episode, there’s only one instance where the girls are bathing (not counting Pina, she’s the lone exception) and they all don’t openly flirt with Itami. It’s really just Rory, but she’s only got forty-something years until she loses all of her humanity, so fuck it, YOLO.

GATE is an incredible anime spanning two fantastic seasons so far and I’m hoping a third is in the works at some point in the near future. If you’re interested in an anime that deals in the concepts of reality and fantasy coming together, this is one of the best representations of it, both in design and writing. It’s an incredible show and you should be watching it if you haven’t already.