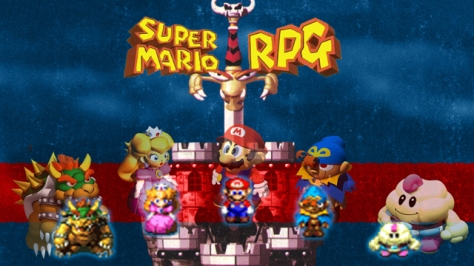 I think it’s safe to say that the majority of us who were young enough to be around when Super Mario was becoming a household name around the late NES, early SNES era, we thought that these kinds of games were going to be the norm for Mario. Generally speaking when a franchise developed, it’s not like they would make games that would go too far off the beaten path of what was making that franchise as much money as it was. So in the case of the Mario franchise, no one would have guessed at that time that during the SNES era not only would we get a Super Mario game that wasn’t a platformer, but a JRPG, but also a Super Mario game WHERE BOWSER AND MARIO WERE ALLIES!!!

Even today I can’t believe that Super Mario RPG: The Legend of the Seven Stars was A, a thing to begin with and B, release in 1996! A JRPG game based off of a Nintendo franchise, that’s the kind of thing I wouldn’t have imagined seeing at least until the Nintendo Wii as a more fresh kind of Mario game, but 1996?! That’s not the kind of risk a game publisher would take at that time.

But goddamn did it ever work! 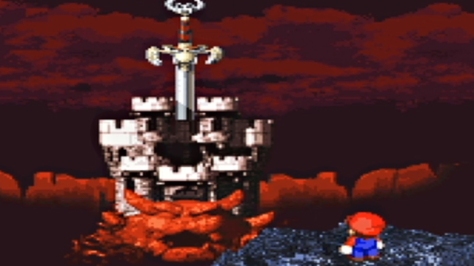 The concept was pretty simple, Princess Peach got kidnapped again, Mario has to save the day, blahdy blahdy blah, so you go to Bowser’s Castle, defeat Bowser, save the princess and HOLY SHIT A GIANT SWORD FALLS FROM THE SKY, IMPALES THE CASTLE AND BLASTS ALL THREE MAIN CHARACTERS TO OPPOSITE ENDS OF THE WORLD!!! And thus begins the true story of Super Mario RPG: The Legend of the Seven Stars, where you travel to various new locations in search for the seven fallen stars of the fabled Star Road and to defeat Smithy, a robotic looking blacksmith from an alternate dimension. Yeah, it’s a little off-the-wall for a Super Mario game. But Squaresoft developed the game, did you expect anything simple and concise?

The game itself, while not canon in the history of the franchise, it’s quite interesting to think we were getting a view of different towns and places that weren’t the Mushroom Kingdom and they were more than Toads that you could talk to. Most importantly though were the introductions of two new allies with Mario in Mallow, a marshmallow-looking (kind of the point of his name) “tadpole” that runs into Mario during his travels and Geno, a doll brought to life by a spirit from the Star Road tasked with repairing it, which ends up becoming the main objective of the game. To have new characters in a Mario game like this was unheard of, considering Super Mario Bros. 2 doesn’t technically count since it was a re-skin of another game made in Japan to be released in North America. The only criticism I ever had of the characters in the game, is that it kind of sucked that Luigi doesn’t even appear in the game, let alone becoming a party member.

Another thing about the game that made it as good as it was (and still is today) was the battle system. It was very simple and had a lot of the basic JRPG combat systems that a game like Final Fantasy would have employed, except for one major thing: Timed hits. This made the game not only strategic, but engaging for the player by forcing them to pay attention to every move and tap the corresponding button to either get a critical hit or reduce incoming damage. Some special attacks had more mechanics involved such as tapping the button as fast as possible or in the case of Mario’s jumps, the chance to make an endless round of jumps if you were timing it just right. I loved that idea, it made every battle at least some amount of engaging, whereas a lot of JRPGs suffer from random battles becoming boring over time when grinding against weaker enemies. Boss battles on the other hand became a game of figuring out how to end it as fast as possible, several bosses being extremely tough and some employing mechanics that were super annoying, such as Bowyer’s (pictured above) “button cancelling” ability, taking one button out of commission for a while (Y for special attacks, X for items and A for attacks), which my first time through was an absolute pain in the ass.

Also having a mixture of the traditional Mario level format but making it 3D with the chance to find treasure and have nearly complete control of the battles you want to actually fight was really cool. Not to mention that there were a few secret paths to either new areas or really good treasure if you looked hard enough, though some of the really special ones I never would’ve figured out as a kid. Once you got to Moleville, the game really started to get different, the first couple worlds being a Mushroom Kingdom section and a forest section, nothing too new for Mario games. But the further into the game you got, the more interesting the world became, going into mines, underwater in a ghost ship, the skies above, a freaking volcano! There were tons of cool areas in particular during the second half of the game and it only served to create a different vibe from the game compared to every other Mario game ever made at that point. 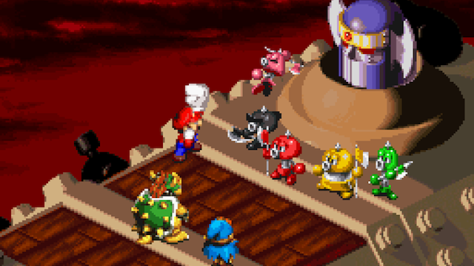 And lastly, once again it was crazy to me as a kid to think I could have a 3-man party consisting of Mario, Bowser and Peach. All three of those characters not only in the same room together, but in the same room together AND on the same side. Each character was pretty unique too, Bowser was the powerhouse, Mario was what he usually is, an all-rounder, Mallow and Geno were more towards magic attacks and Peach was best off as your healer. But it was hilarious using her to slap the shit out of everyone.

For those who were left out or just born too late to be around when this game initially came out, Super Mario RPG was a phenomenal game for so many reasons. The concept alone was insane, but the fact that it was also one of the best JRPGs on the Super Nintendo was surprising in itself, I don’t think many people thought a game like this would’ve been remotely as good as it actually was. So if you haven’t played this gem before, you need to go out and do so. Plenty of ways to do it too, given that Nintendo has it on every console under the sun now with the Virtual Console system around. So get on it!