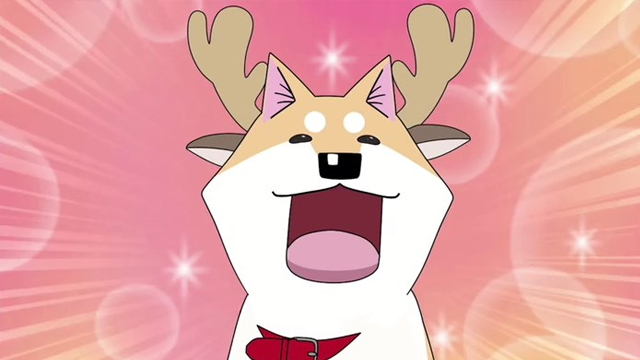 The beauty of my newfound addiction to anime is that I will give almost everything now a chance. So when I saw “Lovely Muuuuuuuco!” show up along the rest of simulcasts a couple seasons ago and I had my girlfriend next to me, I figured why the fuck not?! If it’s stupidly childish like a PBS kids show, then we don’t watch it.

There really isn’t much of a plot to the show, it’s literally just endless hijinks with the cast, including of course the MC of the show, Muco, a wonderful female dog if there ever was one. The show will literally just go from episode to episode with a new premise, such as it’s summer time or it’s raining outside, or some tiny girl shows up. There’s not really anything in terms of a plot that extends over the course of the entire series, it’s just a chain of shorts that are basically “This is Muco. She’s adorable!” and that’s about it.

Not that it’s necessarily a bad thing, in fact I love the fact that there’s nothing going on in the show beyond Muco’s love for a towel and her owner, Komatsu-san. It’s great to have those shows that don’t require your undivided attention, you just sit down and watch, don’t worry about anything you need to remember, just watch this wacky dog and everything that happens around her.

I am more than aware that a lot of people have an issue with Hitomi Yoshida’s voice as Muco in the entire show, claiming it’s extremely annoying and high-pitched. I gotta ask you though…have you watched anime before? That’s so many female characters’ voices! And let’s be honest, when you hear a dog barking over and over again, what do you think it would sound like if that dog suddenly started talking in whatever language we humans speak? It’ll still be loud as fuck! So shut up about Muco’s “annoying voice” already! It’s nothing out of the ordinary in anime.

In fact, I think without the voice, the comedy is nowhere near as good as it is throughout the entire show. A fantastic mixture of cute and ridiculous (Muco’s mouth is either shut or open so wide I’m amazed her jaw doesn’t just break and fall to the ground), Muco is the shining star of her own show, shocking I know, but Hitomi really brings this over-energetic dog really into the forefront every time she shouts. Her immediate changes in attitude, her tendency to fall into the little pond outside the house, her excessive slobbering when a treat rests on her nose since she’s been trained not to eat it until she’s told to, there’s so many things that Muco does that comes off super funny and super adorable.

The supporting cast all have their quirks, though some aren’t as spectacular. Komatsu as her owner does a great job settling things down when he has to, Reina is your classic little girl, constantly messing with Muco however she can. Other characters however like Ushicou and Shinohara aren’t exactly anything special, in fact they’re more there just to create some variety to the show so slightly different events can happen. Realistically, the show is really just Muco and Komatsu-san, that’s really all the show ever needs.

If you can look past the fact this show was probably intended for kids, this is actually a little bit of a hidden gem to me, I was actually super entertained watching all 25 episodes of this show. It’s not a demanding show, it’s a show you can watch with other people, especially dog lovers. Give it a shot if you haven’t already!