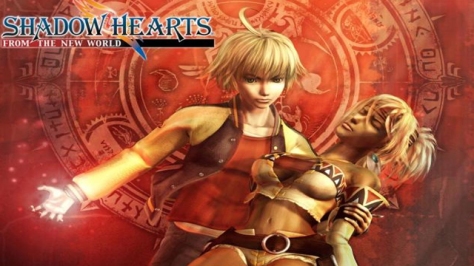 Taking a break from all the Super Nintendo, Sega Genesis era games, let’s go back to my old home of the PlayStation 2 and resume my many musings of fantastic JRPGs from that console, not that I stopped talking about JRPGs when I went retro for a little while.

So this week, I’m going to shine the spotlight on a game I’m sure not that many of you have played, Shadow Hearts: From The New World.

Now take a long look at this picture. You’re not seeing things. This is a JRPG. And yes, you see a JRPG game where a guy in a red ninja costume is fighting a giant Japanese horror movie-looking floating head and he’s using a swordfish with a katana hilt attached to it as a weapon. This is the beauty of Shadow Hearts. The insane, ludicrous beauty of Shadow Hearts. The game is a solid JRPG that takes the usual format and turns it inside out, upside down and in all other possible directions. It’s a mixture of horror, anime, and oddly enough, world history and geography.

The story of the game takes place in 1929, starting in good ol’ New York. It revolves around Johnny Garland, a sixteen year-old boy who runs a small detective agency in Brooklyn. When getting a case to find a missing man for another man who looks like Tim Burton’s version of the Penguin in anime form, he ends up running into a situation where the supernatural become a thing and monsters start emerging from portals. He’s saved by a Native American woman named Shania who has the ability to transform into various Native American spirits through fusions. Together, they end up going into what ended up being the most bonkers JRPG I’ve ever played.

Take a look at this picture now. Other than Lenny, the large man in suspenders, this is your party in the game. Frank, the ninja who had a swordfish…sword in the last picture is now fighting with a saw blade and in fact at some point in the game fights with a bus stop sign. Shania as I said earlier has her spirit fusions. Johnny is relatively normal, his ability is essentially a Scan ability where he uses his camera to take pictures of enemies. Hilda is a vampire who has three forms based on the monsters you have her bite and feed on, she has her pretty form, her pink bat form and a fat girl form when she eats fatty monsters. Natan is also Native American like Shania and fights a martial arts style that incorporates dual-wielding pistols. Mao is a talking cat that fights drunken master-style. And Ricardo fights with a guitar that has a gun, flamethrower and other weapons built inside. Holy fucking shit!

The game is out of its mind and yet finds a way to incorporate alternate versions of history into it. You’ll help break Al Capone out of jail while fighting demonic monsters in Alcatraz. You’ll go to various legitimate ruins in Mexico and South America and fight crazy monsters like that floating head thing. Hell, you even get captured by pirates led by a tiny adorable redhead girl. The game pulls no punches, almost like no idea was a bad idea when they put this game together. And it’s amazing.

The battle system is super engaging as well, unlike most JRPGs that are pick and watch. When doing anything in battle, you have to go through a “Wheel of Fortune” where you have to hit the needle on various coloured spots to land attacks, spells, even items. And most of these wheels will have a red piece on the wheel much smaller than the rest where if you hit that, it’s like a critical hit and can even apply to basic items. It’s an interesting system that like I said, keeps you involved with every turn you make in battles. And through link attacks, you can dictate the flow of the battle by keeping your party doing the attacking while your enemies cower in fear.

So if you’re looking for a good JRPG and if you’re really looking for a JRPG that’s so unlike most games out there, the entire Shadow Hearts series falls into this category, but the last game in the series, Shadow Hearts: From The New World is my personal recommendation, mostly because I’ve yet to finish either the first or second game. Hell, I’ve still gotta find a copy of the original game again, can’t believe I sold it when I had it once!