It’s week #13 of Waifu, Friend With Benefits or One-Night Stand!

Kicking off this week is Mari from a show that I imagine a lot of people didn’t finish (based on the MAL ratings), Anti-Magic Academy 35th Test Platoon (or Taimadou Gakuen 35 Shiken Shoutai). Naturally, because harem/ecchi anime has to have this, she’s the flat-chested girl of the group of four girls while not necessarily fighting over MC Takeru, they’re all interested in him by the time the anime’s over.

Mari is easily the most adorable of the group and that’s a tall order when you have a girl like Usagi who is basically her size by has the bust to put herself in even more sexually tense situations (aka the bunny suit Ikaruga makes her wear). Throughout the show, at no point is she a girl in a harem anime that you just want to take into the bedroom without hesitation, this girl’s a hugger and a cuddler first. She’s super cute in terms of her happy personality, her often peppy nature and let’s be honest, she’s so adorable when she puffs her cheeks out whenever the other three girls tease her about her lack of bust compared to theirs.

But what really separates Mari from the other three girls is her selflessness. While the girls do want to save lives and protect people, all of them have more deep-rooted reasons for why they’re doing what they do as well, mostly selfish. Mari on the other hand, even starts off as a villain for selfless reasons, forced into the terrorist group Valhalla in order to protect the children at an orphanage she grew up in as well. Mari’s willing to do whatever it takes to protect those she loves, so when the Inquisition eventually is able to help her out so she can fight for the right side, she’s clearly the shining star of the show in terms of fighting the good fight.

I’ve got nothing else to really say about Mari, so let’s get the decision out here:

I love Mari. In the anime, every other girl on that show is at best a friend with benefits, they all have little flaws in their personality that I just can’t imagine putting up with them for an extended period of time. Mari on the other hand, when I was watching the show, it was extremely easy for me to watch anything she was in, she’s a shining beacon of light, just this cute, happy girl (when shit isn’t going real bad) with a smile that’s extremely infectious.

To me, it’s pretty obvious that Mari is easy waifu material, she’s that perfect mix. She’s very happy, selfless and loyal, she’s not a boring girl by any stretch, she can turn on the serious face when she has to and like I said earlier, she is the cutest thing when you tease her. Now granted, I won’t tease her about her chest (I love flat-chested girls too), but if I can find any reason to tease her, I’m taking advantage of that. 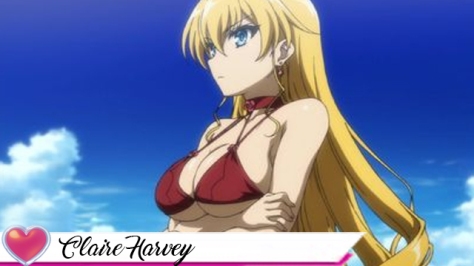 The sexiest girl of the 2016 Spring anime season as my Top 10 notes, Claire Harvey from Hundred is the first of the many busty girls that could be taking their shot in this illustrious (not really) contest of personalities.

Despite what the show does with Claire, I think there’s far more to her than her blind affection and flirting with MC Hayato. To address it, yes she has a massive rack and yes, she flaunts it a ton throughout this ecchi harem series, whether it’s in her various swimsuits, her battle attire that leaves nothing to the imagination, or speaking of which, bathing naked with Hayato’s back to her where the anime even goes out of its way to show how her breasts double as flotation devices. But like I said, Claire is far more than just her chest.

The most pertinent thing to talk about with Claire, is her personality that she has when she’s not going out of her way to court Hayato. As the leader of the Slayers at Little Garden, she’s as reliable as they come, there’s no one in the anime (except the MC, because y’know…anime) who has a better control of things than her, she is the number one pick for anyone to front their squad, she’s one of the best fighters, she’s a strong tactician and there’s no one more loyal to the cause than she is. It’s no surprise she has a number of followers that are with her at all times, she just attracts other strong people with her own power and intelligence.

Now taking her guard down, I actually think she’s a real cool girl. Yes, she gets a little too brainwashed in love with Hayato after a series of “accidental ecchi moments”, but I think if you take that side away from her (aka she calms down a little bit), Claire is very down to earth, she just suffers from “Anime First Love Syndrome” where instead of being a normal girl, she helplessly tries to court the MC for sexual relations. But in the bits where she’s not dead serious or trying to lose her virginity, she comes off to me like a bit of a tomboy who is more than capable of taking care of herself, leaning more on her battle side of course. Oddly enough though, I think the closest we got to the real Claire was when she was naked in the lake, she was very calm, very sweet, just a really nice girl.

So with that being said, here’s my call on Claire:

I originally had her penciled in as a friend with benefits, but after thinking about it while writing my background on her, I started remembering a lot of the more minor scenes with her where she wasn’t being the leader of the Slayers, nor Hayato’s big-breasted love interest. Claire’s actually a wonderful girl, she just suffers from the over-exaggerations, over-sexualization and over-characterization that ecchi harem anime can do when at its worst. If you’re looking at Claire at face value, she really does seem like she’s just the girl with the biggest bust who ends up getting groped and has the MC’s face buried in between them. That’s her role. But if you really take a closer look at Claire, she is beyond more than that and I truly believe that if she existed in real life where there aren’t alien bug things to fight and she’s not having “ecchi anime bad luck” where her clothes fall off or the MC falls on her, she’s just a normal girl who to me looks like a cool girl to hang around and just shoot the shit with on a regular basis. I truly do believe she’d be a great companion for it and it has nothing to do with the size of particular body parts. I can judge girls by more than their covers.

Capping off this week is our first visual novel-only character. We’ve had some girls that I know from visual novels, but Angela from Princess Waltz is a solely visual novel-based character. Though I do wish they’d turn it into an anime.

Angela is a very interesting case because in the visual novel she is a scary motherfucker! Out of all the girls in this card battle visual novel, Angela is easily the most dangerous, the most aggressive and the most cruel. Suzushiro is hidden danger almost like a Saiyan and Shizuku is more of a feral danger, but Angela throughout the visual novel is looked at as the girl you need to watch out for the most. She’s very cold, hot-headed and more than willing to give zero fucks to achieve what she wants to achieve.

However, because hentai has to show you more than just the “I will kill you!” side, we do get to see Angela in different lights as well and that’s where things get a little more interesting. We see that outside of battle, she’s far calmer, seemingly devoting that side of her personality solely to the tournament where all these fights take place. She still has a bit of an uptight bitchy side, but it’s nowhere near the levels of her battle personality. She seems to open up a little bit more as well once you get close to her. It’s clear she’s a real tough girl that likes to be a bit of a lone wolf, but getting close to her really opens up a more vulnerable side of her, one that she clearly wants to hide, because she doesn’t exactly know how to use/control that part of her personality.

I’ve got nothing else, so here’s my call:

My favourite girl from the visual novel, I really wanted to find some way to justify having a Waifu sweep this week. But because there is almost nothing to go on when it comes to this hidden personality of hers that really you see for five minutes when you get to have sex with her in the visual novel, I can’t in good conscience put her anywhere higher than friend with benefits status when I can’t say with a straight face that we’d be a great match forever and always. For 90% of the visual novel, she’s a bitch, there’s no hiding that fact. I think that if I was able to get close to her, she’s be less of a bitch, but there’s nothing the game ever showed me that can make me comfortably say I could spend every day with her and have zero issue with that. Sorry Angela, I love ya, but I can’t guarantee that I’ll love ya for that long.