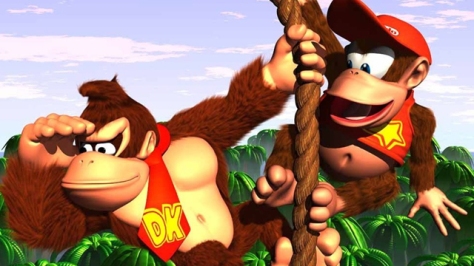 I’ve already done my gushing of Super Mario games already, so it makes sense to start devoting time to my next favourite series of games on the Super Nintendo and that of course would be the Donkey Kong Country series. Though while I have played and finished the second and third installments, I only ever owned the original game (since rentals were still a thing, kids), so I got the most out of that specific game. So because of that and really the fact I can’t remember most of the other two games, this week’s spotlight is devoted specifically to the original Donkey Kong Country. 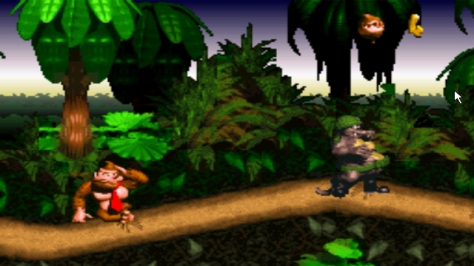 It’s crazy to think that with the graphic style of the game that it was a Super Nintendo game. It looks like PlayStation level graphics to me still to this day. I remember thinking it looked so cool as a kid, after all I was so used to everything still being very sprite-looking and I hadn’t run into Super Mario RPG at that point either, so this was my first look of seeing something so different on the Super Nintendo. And to think day, while other SNES games have aged better, I’d still argue the Donkey Kong Country games still look pretty good by today’s standards. Just more proof of how timeless the Super Nintendo is.

Being a young kid who loved platformers like Mario and Sonic and other smaller games like Boogerman, Mickey Mouse’s Castle of Illusion and other games, Donkey Kong Country was such a breath of fresh air for me with the minecart levels, the crazy underwater levels, the stop-and-go levels, the red light/green light levels and then of course there’s the different kinds of animal companions you can have. So many platformers are just go to the right, avoid enemies and the odd trap. Whereas Donkey Kong Country has many level gimmicks, a ton of secrets and of course the extra cool sections where you’re trying to be precise with shooting out of barrels. The game offered so much more differentiation to the normal platformer format and I absolutely loved it then and still love it today.

I also loved the boss battles in this game, not to mention how unique they kept getting in the following games. Granted in the original game, two bosses were recycled (the beaver and the vulture), but to have at least five unique bosses in the game, whereas in Mario games, traditionally there’s at most three unique bosses in terms of how to beat them. My favourite was actually the Queen Bee, because as a kid I freaked out the first time I played this battle, cause I was wondering how the hell I was going to beat a giant bee, when traditionally the majority of bees I’d encountered in the game so far, I avoided instead of killing. Needless to say I was so happy when I beat her for the first time.

Lastly, I loved how unique it was to have two actively playable characters in DK and Diddy. While games had Mario and Luigi, or Sonic and Tails, you couldn’t just interchangeably switch the other out the way you can in Donkey Kong Country. And then unlike Mario and Luigi, DK and Diddy are hugely different in styles DK can take out bigger enemies, while Diddy has a lot more speed to him.

There is so much about this game I love, I’m almost willing to say that this is a perfect game, as in there’s zero notable flaws about it. The gameplay is solid, the level design is fantastic, the music is so good. I mean honestly, other than a couple bosses being recycled, I really can’t say much negative about the game. So there you have it, Donkey Kong Country: fantastic game. And then to think the game gets even more expansive and unique in the following sequels is mind-blowing to me and a reminder of a time when Nintendo was king.

I miss those days…