We’re now into our seventh week of the “10 Weeks of Anime Hair Top 10s”. This week we continue on with blonde-haired girls.

Now I’ll lay down the rules I’ve had from previous week. The usual rules to these top 10 sexiest girls lists apply, this is a list based on my personal tastes, so depending on what you’re into, my list will be EXTREMELY different to yours. Also, I’m not just opening this up to girls from shows I’ve watched, I’ve opened it up for any and all anime, as I’ve come across a ton of artwork of men and women from shows I’ve yet to watch, so there will be a few names on each of these lists that I’ve never watched the show they are from. 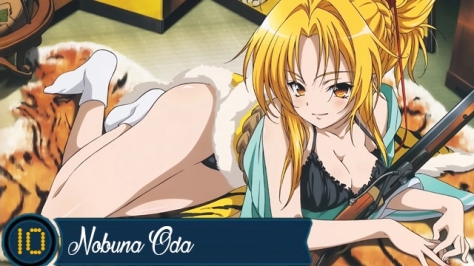 Kicking off this week’s Top 10 is a legendary feudal lord turned into a beautiful blonde bombshell (the former being Oda Nobunaga) from The Ambition of Oda Nobuna. While I haven’t watched the show much at all, at best two episodes from what I remember. But from what I’ve seen of her and from the many fantastic art drawn of her, she’s an absolutely gorgeous woman, a dangerous woman, but a gorgeous woman nonetheless. While some girls on this list are more on the side of pretty or glamorous, Nobuna is more towards the side of a diamond in the rough kind of girl, she’s a beautiful girl with a tough demeanor and living a not-so glamorous life. Her beauty is in how she retains her beauty despite the life she lives, rather than the girls that you know have access to all the makeup and modern-day styling they want. 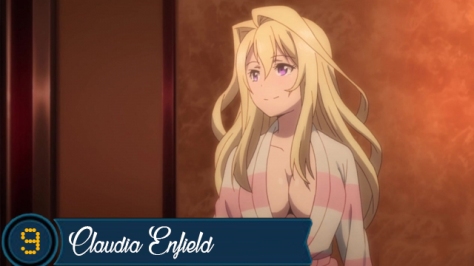 While I could care less about the personality of this girl, there’s no denying that Asterisk War’s Claudia is still a very gorgeous young woman and yes, there are two massive reasons as to why. Though of course her very flirty and sexual personality does add onto the sexiness of her character, while maybe not so much on the “attractiveness” scale. Either way, the time she spends on the screen, she makes sure you’re aware of the near perfect body she has. Like…she REALLY makes sure you know… 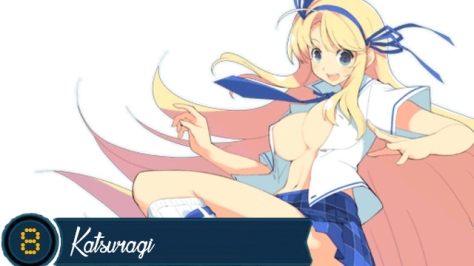 Speaking of anime that REEEEEEEEEEEALLLLLLLLLLLLY makes sure you know how sexy the girls are, here’s Senran Kagura’s Katsuragi! And yes, I can’t help but allow the girl that may or may not be the most grope-happy anime girl ever get a little extra rope because not only is she a gorgeous blonde, but she does not hesitate to grope and create more sexual tension with the various girls around her. Her antics aside though, she’s a very pretty girl, though the tie I could do without, I have no idea what the point of it is, it’s in the center of the chest, it covers nothing important! She’s also not too glamorous, nor too tough looking, she comes off very girl next door-ish. Except the hot neighbour has a penchant for groping every girl she sees that have breasts equally or larger than her own.

I’m so glad I finally got to watching and finishing the Nisekoi anime (thus far) as I finally got exposed to girls like Kosaki, Seishirou and of course, this blonde beauty, Chitoge. Taking her very violent personality aside, there is absolutely no denying how beautiful this girl is and how beautiful on the inside she actually is when she’s actually not being a massive tsundere. When she is being a cute lovestruck high school, she’s absolutely adorable and when you match that side of her with the beauty she has in her school uniform (which by the way, what the fuck is with those long-ass ties?!), her casual clothes and especially her bikinis. Classic example of a cute blonde. 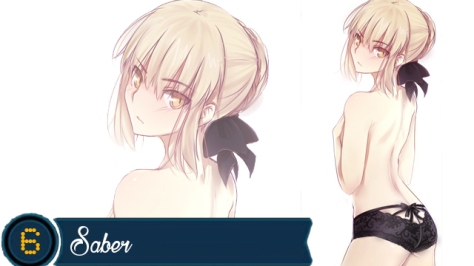 And there’s Saber. I remember first being exposed to Saber and the Fate/Stay Night series by admittedly the 18+ visual novel (I did not expect her and Tohsaka getting it on either, wow!) and the couple of anime series over the years after that. It’s arguable to some that she is easily the hottest and most loved blonde in anime, but due to my own personal biases, she’s #6 on my own list, but is more than capable of taking the #5-#2 spots at any given time (but no one’s taking #1 other than the winner) as she is undoubtedly a wonderful woman. In fact, I really appreciate that a girl so loved by the anime community, she’s also not overly beautified or given over-sized breasts like most anime girls. I think if this list was for the most beautiful girls, rather than sexy. She’d be #2 in blondes (cause again, no one’s topping #1) and quite possibly #2 out of all girls. But on a sexy list? She’s gotta settle for #6 this week, not that she should be disappointed in that one bit.

The first time I watched the first season of Infinite Stratos, I did not like Cecilia one bit. Then I got a little older, re-watched the series when I found out there was an English dub of it and holy shit did I miss on this girl the first time! While yes, she’s still a smug, uptight rich girl with quite the ego to her, she’s also one hell of a sexy…smug, uptight rich girl with quite the ego to her. While other girls go for the innocent type, Cecilia makes no bones about her intentions to court the MC in Ichika, in fact if it wasn’t for Laura taking him as her “bride”, Cecilia would easily be the most aggressive girl in the series. But at best, she was going to visit Ichika in his room in sexy black lace underwear, Laura actually snuck into his bed and slept with him, naked. But who knows…that underwear might’ve come off in an overnight escapade, we’ll never know.

I’ve just started watching Haganai for the first time a few days ago and while I’m already super into Yozora, there’s no denying that between the two of them and probably between the other girls soon to show up (as I’m only done the first three episodes so far as of writing this), Sena’s easily the eye candy of the show, not that the image of her in that blue bikini in Episode 3 left any impression on me at all. While I could do without the obnoxiously large butterfly hairclip, Sena is a gorgeous young woman, classic blonde hair and blue eyes combination and the assets to boot. But seriously though, that bikini…wow!

Speaking on blonde hair and blue eyes, let’s add glasses to make her hotter and then double her breast size and make her one of the toughest girls that’s the easiest to make her blush and we pretty much get Satellizer (what a ridiculous name though) from Freezing. No doubtedly designed to be the hottest girl in a show that makes it no secret that it’s about girls fighting, getting naked and touching either. It should be no surprise too when she’s the target of every girl’s affection when it comes to groping and the many kinds of sexual tension you can have in a fan-service ridden anime. When you spend the majority of your time in an anime either undressed or exposed because your clothes are torn, you’re gonna get a high spot on this list just by such an unfair advantage.

But then you take the blonde hair, blue eyes, big breasted girl and twirl her hair like there’s no tomorrow you get the girl that slightly edges Satellizer in Hundred’s Claire. It’s still amazing to me how much I warmed up to Claire over the course of Hundred’s first (and probably only) season, as I had zero interest in her at the beginning, in fact I was way into Emilia, who I ended up actually disliking by the end of the season and Claire I ended up loving the most. It’s no surprise she ended up so high on this list, she was the #1 on the hottest girls of the Summer season this year. What really did it for me with Claire was the scene of her bathing in the lake. The picture I used for her on this list was such a great sexy moment for me and grabbed my full attention when normally larger-chested anime girls don’t usually work for me that much. Gorgeous girl.

But in the end, nothing can defeat the overly-biased choice I have in anime girls in Infinite Stratos’ Charlotte Dunois. I make no bones about it, no sugarcoating, no hiding things, nothing, my #1 choice is 100% biased in that Charlotte is my eternal #1 waifu and regardless of the fact there are girls with larger breasts than her, bigger butts than her, more athletic bodies than her, it doesn’t matter! She’s my favourite! And if you’ve been keeping up with my lists like these, I do have a massive penchant for girls who disguise themselves as boys in the beginning and then turn out to be extremely beautiful girls. Charlotte also does have an advantage with scenes like the shower discovery and the hilariously stupid moment of Ichika tripping and somehow pulling her panties completely off when she’s already fallen over. But most importantly, no one on this list could pull off kitty pajamas as good as Charlotte! In all seriousness though, KITTY FREAKING PAJAMAS!!!

But yeah, Charlotte’s the hottest blonde in anime, as far as I’m (very biased) concerned.

So that’s the Top 10 blonde-haired anime girls, hope you enjoyed it! Don’t forget to put your own favourites and Top 10s in the comments below.