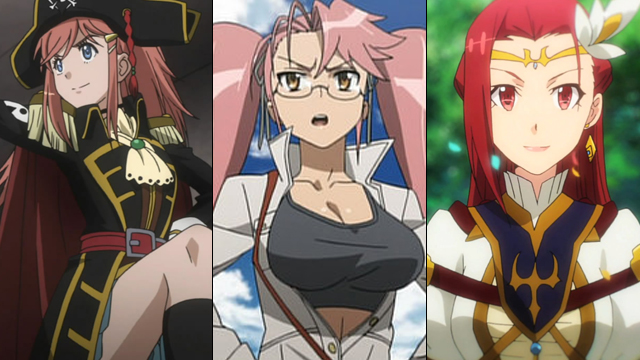 It’s week #18 of Waifu, Friend With Benefits or One-Night Stand! 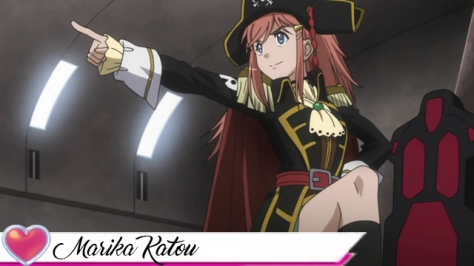 This week, we kick things off with everyone’s favourite space pirate (maybe just mine, I dunno…), Marika from Mouretsu Pirates (Bodacious Space Pirates). This adorable high school girl turned space pirate due to learning that her father was one of the most notorious space pirates ever and her mother was a pirate as well, she’s extremely cheerful for what you’d expect a space pirate to be, that’s for damn sure.

For a 16 year-old girl who’s become a space pirate captain, she was clearly raised very well by her mother, Ririka. Marika is not your typical space pirate, she’s not a pathological liar, she’s not a disgusting, violent being and most of all, she certainly isn’t some ugly trigger-happy pirate. Like I said, she’s extremely cheerful, very optimistic and really just the biggest ball on sunshine on a ship that you’d expect to be full of misery, danger and filth.

She’s also got a dual-personality of sorts, it’s hard to tell if she literally just has two different sides to her, or if one hides the other until the time is right. When you get the high school girl Marika, she’s very naive and extremely clumsy at times. There are certainly moments throughout the anime that you pretty much believe that she is a total airhead and rightfully so. But then when the inner space pirate kicks in, she suddenly drops that moniker and becomes a cunning, devious, super intelligent young woman, capable of some crazy strategic moves to achieve her objectives.

Lastly, Marika is a very caring captain of her ship, whether we’re talking the Bentenmaru or the Odette II when the Yacht Club is sailing the…infinite seas? While most pirate captains would have no problem sacrificing a lesser person aboard the ship to achieve their end goals, Marika on the other hand wants to ensure everyone not only survives, but doesn’t suffer any major injuries. She’s willing to take risks, but if it’s a clear suicide move, there’s no way she’ll do it. Even if this means she has to overwork herself way too hard to the point she gets no sleep for a while (which doesn’t help, cause she’s a heavy sleeper), she’ll get it done, because she cares that much.

Anyways, here’s my call on Marika:

I really like Marika, she’s a great example of a girl who overcomes the cliche happy high school girl trope and turns herself into someone far more interesting than her initial character would’ve placed her as. She’s a free-spirited girl, she does what she wants to do and yes that includes being a space pirate, when she had the option not to do it. She still exhibits normal personality quirks, but it’s arguable that it’s a facade hiding the more intelligent girl that Marika actually is. Either way, she seems like an absolute joy to be around, so I’m in!

Okay okay okay okay. Let’s just push away the clear “tits n’ ass” stuff that Highschool of the Dead is known for and try to look at Saya objectively, shall we?

When she’s not killing zombies in little to no clothing, Saya initially comes off as a very rude and impolite girl with a very short fuse. In the early going, you’d assume Saya is just an absolutely bossy stuck-up bitch, but as we learn through the anime, it’s actually only the cover to this beautiful book.

To those who she considers close to her, Saya is an extremely caring person and more than willing to do anything for her friends to protect them, naturally in a zombie apocalypse that anything becomes more life-threatening, but we can safely assume that in a normal life, she’s happy to help her friends overcome any problem they’re having. This is certainly shown with how she becomes almost a mother figure for the 7 year-old Alice, she’ll kick the shit out of you if you try to do anything to break the little girl’s innocence.

I’ve got not much else I can think of about her (other than her being a genius per se), so here’s my call on Saya:

Saya would be in One-Night Stand status if I had only watched the first half of the series, because she is indeed a bossy stuck-up bitch. But once you get past that tough exterior, there’s a much softer, caring side of Saya that is more than worth the wait. Also keep in mind that I’m trying to identify how Saya would be like if there was no zombie apocalypse, so I’m trying to separate the violent side of her from what her real life self would be. Because of this, I think she would be a much calmer girl if the outbreak never happened and in turn, perhaps a little more approachable. 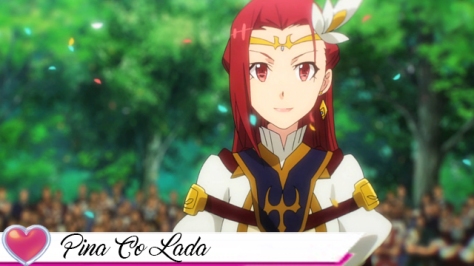 This Crown Princess of the Empire and leader of the Rose-Order of Knights in the Special Region from one of my favourite anime shows in the last two years, GATE, she’s quite the interesting case to go through to say the least. Trying to separate the girl who’s a Princess in another dimensional world where it’s the middle ages (with magic and dragons and other crazy shit) from just Pina Co Lada, the girl, that’s a tall task. But I’m always up for a challenge!

Trying to transfer her into a modern day girl, right off the bat we’d have to look at her as an upper clash, rich girl with a bit of a super serious personality, a bit borderline irritating. But if she follows the same path, she’ll get exposed to otaku culture and she’ll change so hard you won’t believe your eyes! But before that, you have a girl who’s extremely confident in herself, believing no one could ever top her and will go out of her way to screw people over and outright lie to them to keep her status in check.

Assuming that at some point she’s brought back down to level ground, taken down a few notches off her high horse, Pina’s actually a very loyal girl to those she cares about and in some ways is very stubborn about personally getting involved in as much as she can, regardless of the danger involved. She’s very charismatic, a great debater and will not hesitate to voice her opinions, whether it’s her place or not. But most of all, she’s a tough as nails girl. For a girl who could easily get by without breaking a nail, Pina has no problem getting her hands dirty if she sees it being beneficial.

Lastly, the otaku-exposed version of Pina is hilarious at times. Take the typical anime cliche of an elegant, holier than thou, stuck-up rich girl when she gets exposed to the content of the “lower classes” and you get an easily embarrassed and secretly perverse young lady who just doesn’t now how to handle these new and very mixed emotions. It’s moments like those that make her super adorable, almost laughable at times.

So with that all out, here’s my call on Pina:

This is a really hard decision to come to, because I actually really like Pina. I think she’s a beautiful girl with a beautiful mind on the inside, but unfortunately I think she’s too hard a nut to crack and one that I think someone such as myself would not be able to crack. And since the initially cold and devious exterior Pina has would be the one I see the most of, it’s not something I’d really be too interested in. Honestly, if there was a fourth option being “leave her the fuck alone”, I’d take that, but since that isn’t in the name of the game here, this is the option I have to take in the context of this setup. Not that I’d complain with a one night only event with this gorgeous redhead.