I don’t know how the core audiences in Japan are when it comes to anime and the various cliches and plot devices that are used in various shows. But I feel like if there’s any cliche in anime that I don’t understand how it gets drawn up like it will totally fool people, it’s female characters that are first introduced as a “boy”. They’re dressed like a boy, they “act” like a boy, they “talk” like a boy and they “look” like a…okay, no. Anime, I don’t know how dumb you think your audience is, but in my case specifically, I haven’t fallen for this once. I can call these cliche characters a mile away.

Not that it matters too much, because I love those girls. I always have. And recently, I got exposed to one of my new favourites, Seishirou Tsugumi from Nisekoi.

Pretty boy? Check. That’s the first giveaway for a female character in a male disguise. Feminine voice? Check. That’s the biggest giveaway, something I don’t get why anime doesn’t try and have a masculine voice in the early going at the very least put me off the trail.

In the early going, Seishirou comes to us as a hitman from the Bee Hive Gang, the mafia that Chitoge is the next in line to be the head of. “He” is overly protective of Chitoge, as “he” promised Chitoge that “he” would protect her and is under orders to do so, the belief that main character Raku has Chitoge forced into a relationship with him.

But as all romantic comedy harems go in anime, when there’s a boy challenging the main character, there’s only one possible outcome…

Turns out to be not only a girl, but a girl with the largest breasts on the show? Ding ding ding! All the checks! Upon the shocking revelation that Seishirou is actually a woman, this is when the show is at its best. I actually believe that the addition of Marika and even Paula and Haru overdid it when the idea of Chitoge vs Kosaki was already in full swing. Having Seishirou into the mix at least had one person (without a key) on the outside looking in, so there was that extra piece in there. Not only that, but Seishirou finished the triangle of characters, Kosaki the sweet, shy girl, Chitoge the violent tsundere and Seishirou as the secret tomboy. For me, that’s all I could ever want from a harem anime.

Because upon the addition of Seishirou into the mix of the harem already being heavily fought between Kosaki and Chitoge, the story had a chance to separate people at random now, instead of it being forced like Raku and Chitoge constantly were in the early going. With Seishirou, her flippant multiple personality breakouts could happen at any moment and pull Chitoge out of there so Kosaki and Raku are alone, or by pulling Raku away from Chitoge, now Seishirou’s alone with Raku. And as the anime shows us, at least in my opinion, those are the best moments. 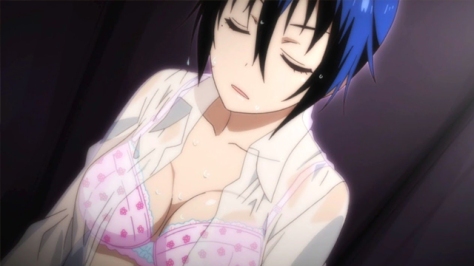 The initial scene where Seishirou’s true gender is revealed (in the most shocking fashion *sarcasm*) is really good from the standpoint of being from a minor ecchi harem anime. After a duel where Raku surely would’ve died, he manages to somehow knock Boy Seishirou unconscious by jumping into a pool (that part doesn’t make as much sense, but whatever) that’s conveniently placed not far from a classroom window so no one suffers broken legs. Upon fleeing into the boy’s changeroom with the unconscious Seishirou, Raku decides that undressing the boy is the best option now, so he doesn’t get a cold. Of course, upon taking his pants off and undoing his shirt…something is amiss! To make matters worse, not only has SHE woken up and is about to freak the fuck out, everyone looking for him is about to enter the changeroom so Raku grabs her and they hide in a locker, that must be double the size in terms of width to any locker I’ve ever seen. While in hiding, Seishirou completely removes that badass male attitude she had earlier and goes full-blown embarrassed and humiliated young girl. To cap off the scene, Raku calls her cute and that completely throws off Seishirou, fully completely her transformation into an adorable young lady.

Anything Seishirou does from that moment onward is incredibly adorable. Regardless of the fact that she tries so hard to get back her tough guy image that she sort of had going in, it’s immediately destroyed any time Raku says anything remotely classified as nice to her. She drops her entire badass attitude and starts blushing madly and denying everything under the sun. The longer the anime goes on too, the more we see of her in a more girlish light, we see her wearing cuter clothes, we see her liking cute things, we see her being herself, the part of herself that she kept hidden for so long because she had to keep her image as the best hitman in the Bee Hive Gang as prevalent as possible. No one was to know that she was a woman, so naturally the main character had to be the one to literally strip her down to her true self.

And I’m more than happy that he did, because it gave me one of my favourite female characters in quite some time.