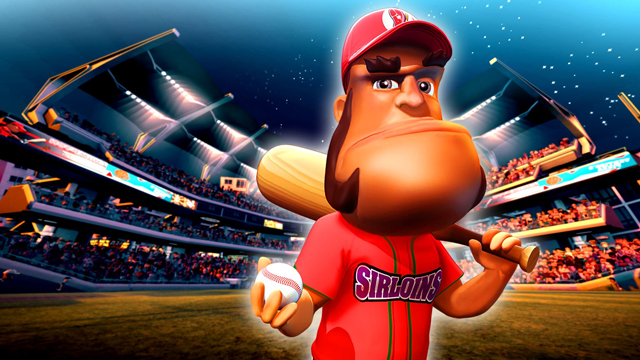 If there’s any sport I love to play, it’s baseball. I played it all the way through my childhood, I play it again now in recreational leagues, so out of any sport, this is the one I love the most. And yes that includes being above hockey, which I’m pretty sure is an offense worthy of deportation in Canada.

But when it comes to baseball games, I really haven’t played a lot of baseball games since the SNES era of arcade sports games. I’ve said it before and I say it a ton now, sports games nowadays are boring as fuck, EA Sports has killed a genre of games that used to be thriving. You just don’t see a ton of arcade sports games anymore, games like NBA Jam, NHL Hitz, NFL Blitz, they just don’t exist anymore. You want a crazy, over-the-top sports game, you have to buy a Nintendo console and deal with Mario’s bullshit.

So when a game like Super Mega Baseball suddenly appeared on my PS4, I jumped at it full force. 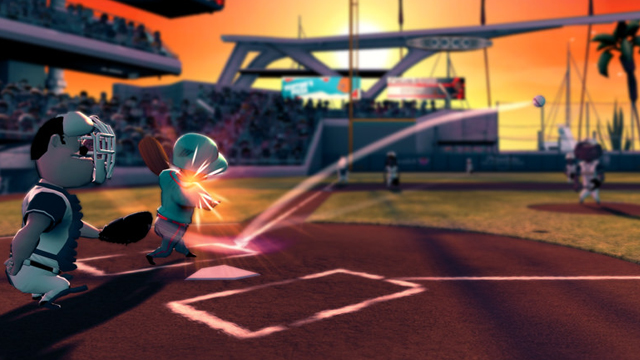 Super Mega Baseball is an arcade baseball game produced by Metalhead Software (Canadian!) where the American pasttime has been stripped down to its bare essentials. Instead of in-depth batting, pitching, fielding, infinite strategies and whatever else you have to throw into your “realistic” baseball game to make it passable at best, Super Mega Baseball keeps it simple. Every pitcher has the same kind of pitches, there’s no crazy defensive system, it’s like the old games. You run at the ball and you throw to the base. The game also doesn’t throw in random stuff like wind speeds, cutscenes to make it look like a real broadcast, hell there isn’t even any announcing where you hear the same 10 lines through the entire game. You just load up the game and play the fucking game! What a novel concept!

The only real complex thing is its difficulty system. You can just turn up the difficulty when it gets too easy, but what the system also allows you to do is tweak specific categories. Are you really bad at the plate, but a really good pitcher? Set the difficulty accordingly. Is the fielding way too easy? Turn that shit up! You can customize the difficulties of batting, pitching, running and fielding to the amount that makes every game just enough challenging for you without making every facet of the game a chore. So if you want to be able to hit 10 runs an inning and then challenge yourself to hold those ridiculous leads, turn the batting to 1 and the pitching to 99. 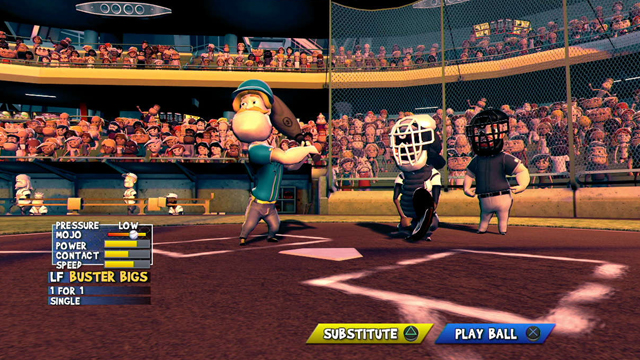 In terms of the game modes, there’s not a whole lot of options, which sucks. There’s no online play to this game, multiplayer is strictly local which really sucks for me as I’ve played this game a ton. There’s just exhibition and season modes, no home run derbies, no playoff modes, nothing of the sort. Obviously in a game like this, a GM mode or a Be-A-Pro mode makes no sense, but to have just a little more than Exhibition and Season mode, it would’ve been nice.

What really sells the game though for me, is the ridiculous world and cast of characters they have. Some of the names of the players in the game (before you customize them, which I totally have) are fucking hysterical. Names like Rolf Steak, Hurley Bender, Holder Close, Theodore Stiffner. I love it! And having various team names like the Sirloins, the Platypi and the Herbivores are also kinda funny and they have their own specialties, some are power hitting teams, some are speedsters, some are pitching expers. I’m shocked that there wasn’t a power hitter though named Jack Ripper, so I fixed that real quick. Also, there are girls as well in the game, it’s not a boys-only club. 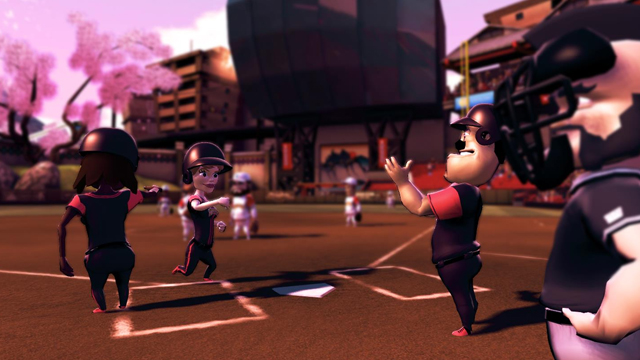 I love arcade sports games and out of the ones I’ve played the last little while, Super Mega Baseball is the best of them all. It’s a great casual game to play a couple games in and then setting it aside for a couple days before coming back to it. And it’s yet to get old to me, I can keep ramping up the difficulty, change the characters, mess with their stats and keep the game fresh every time I play it. And I love it!