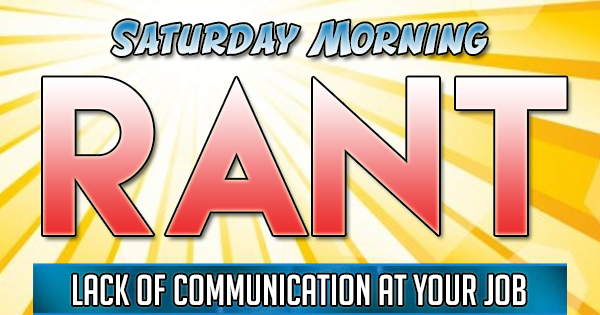 In my case, there’s a long list of things I hate about the various jobs I’ve held over the course of my life. But the one that always gets me the most is the most simplest one to solve: communication.

Now Adam, what do you specifically mean by communication? It’s not a trick question, the answer is literally just that, communication. Let me ask you this, how often at your job do you get thrown a curveball that you could’ve been notified of earlier so you’d have time to prepare for it, or at the very least know that it’s coming? This could range from many different things, such as a staff member leaving early, extra work coming in, something’s going to be down for maintenance, anything pertinent towards giving you a heads-up for something that will potentially fuck your shit up for the rest of your shift, if not longer than that.

This happened to me recently, where I would’ve loved to have known that the only other person who had a license to a specific piece of equipment was going to be leaving early, leaving me alone to now take on double the work I would normally have done. Now it wouldn’t have been such a big deal if the job I was already doing wasn’t already so physically exerting. I’m not trying to over-exaggerate her, this is legitimate, but there was one day at my job where I actually had to stop what I was doing for a moment and sit down because I got seriously light-headed and felt like I was going to pass out. A usual day, I leave work extremely exhausted and usually a little sore. So imagine the absolute disdain on my face when I’m told out of the blue that my workload just doubled. Could’ve telling me this information at the start of my shift helped? Kind of, at the very least it would’ve told me not to over-exert myself for the first half of the day before my workload would magically double.

It’s a constant problem with so many jobs I’ve had, that no one wants to talk to people and tell them information that would help them. So many supervisors, managers, owners, they leave their workers in the dark on so many things when they really don’t need to. It’s one thing if it’s something on the business side, of course I’d understand that needs to be kept quiet. But something small like a co-worker leaving early, something being broken or being shut down for maintenance, there’s so many little things that not only should be told to everyone on staff as soon as possible, but it needs to be told. The more information we have as workers, the better a job we can do, because we can plan ahead, devise a strategy to tackle the incoming problem(s). If we’re told on the spot that it’s happening, we’re planning on the fly, rather than having a little time to be a couple steps ahead before the extra workload suddenly puts us two steps back.

So if you’re in a position of management, talk to your co-workers, keep them informed and keep them involved. If you do that, they’ll feel wanted, like they matter and that they’re not just pointless pieces of shit. And guess what happens when a worker feels like they matter? They work harder.

I know, what a secret I just revealed, eh?

One thought on “Saturday Morning Rant: Lack of Communication at Your Job”