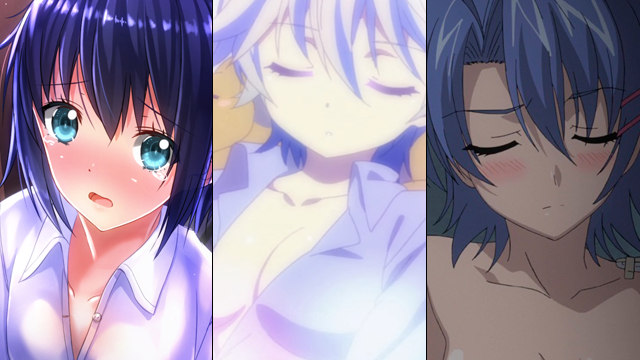 It’s week #25 of Waifu, Friend With Benefits or One-Night Stand! 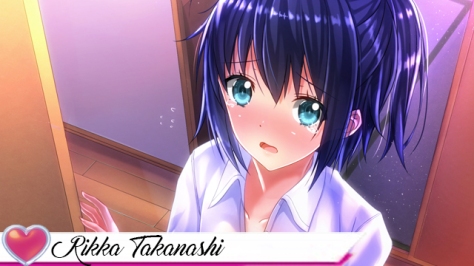 Obviously known in the show for having a serious case of “chuunibyo”, which is also known as “Eighth-Grader Syndrome”, where the person still believes they’re a fantasy character from a game or anime or sometimes completely in their own world. When she first meets with the MC, Yuuta, she’s beyond lost at this point, talking in epic anime exposition, excessive hand gestures, all that jazz. Though when he ends up getting involved in her life, there are points she sort of breaks character (usually when he pulls on her eyepatch or something to that extent) and sounds a lot cuter than she already is.

In reality, there’s a lot more going on with Rikka than just a desire to stay a kid. Without spoiling anything, there’s a much deeper reason for her chuunibyo personality than just wanting to be a kid. And when that very hidden and suppressed side comes out, she’s almost like a different person, perhaps a young adult who’s trying to overcome hardships. Interestingly enough, we have an early idea of how Rikka is in relationships as she has one with Yuuta in the second season. She’s splits her chuunibyo personality 50/50 in this relationship, often falling out of character in certain moments, other times mixing in that other side of her with her relationship, like for example calling their relationship a contract, like they’re two characters bonded together through magical means.

Outside of that, Rikka is a constant source of energy, her over-the-top actions become infectious as the anime moves forward. She still retains some typical things a young teenager would have, she’s picky with certain foods, tries to avoid certain things and is a little intimidated by her elders, or in this case her older sister who’s happy to whack her over the head with a ladle when she gets out of line. She can be reserved at times and will often hold her cards very close to her chest, but over time once she trusts you (which in the anime is only five people, the same five numbers she has saved in her phone), she’ll slowly bring down the many barriers she has and that beautiful side of her will reveal itself.

So with that being said, here’s my easy call on Rikka:

It didn’t take long for me while watching the anime to have Rikka in this category. Obviously her age in the anime about half mine today, her current state (like most girls on these posts) is far too young for me, but imagining Rikka in her 20s, having grown up a little more, I can see that once the chuunibyo side of her is gone, at least in terms of public display, she’ll be a far more mature young woman, yet will continue to retain that cute, charming, bubbly personality she already has. And come on, you know she’s staying a cute, short girl and I’m a giant sucker for that! 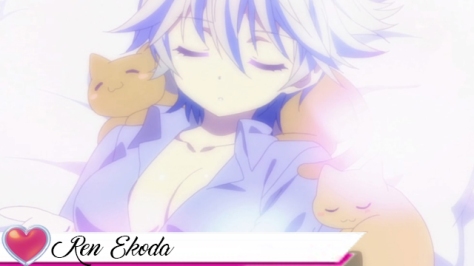 Second up is the female-attracting magnet of Anne Happy, it’s Ren Ekoda!

Now because of her “rare condition” that attracts all females (including animals) to her, you wonder if the anime is implying that Ren is only available to women. There’s no clear-cut answer to that question, so for this we’ll assume at the very least that Ren is bisexual, open to both men and women, her condition just makes it that females cling to her like there’s no tomorrow.

As a person, Ren is very quiet and reserved, the stoic girl of the five main girls on the show. She has a love for dressing up in costumes and is a heavy sleeper, often needing her best friend Hibiki to wake her up, as she’ll sleep in otherwise. In the early morning, she’s barely functional, like she got zero sleep all night. In terms of her personal life, Ren is the kind of girl that’s almost like a white knight to her friends. She’s always there to help them whenever she’s needed and is very blunt when speaking to her friends about important things, she’s not one to sugarcoat things.

There isn’t a whole lot else to say about Ren, so I’ll just get to my decision:

I really, REALLY like Ren, but the problem is that with her personality, I’m unsure if a long-term relationship is the way to go. I tend to gravitate towards more upbeat and bubbly personalities and while Ren is a very caring girl, a very nice girl and like to be super attractive when she’s older, I don’t see her as a wife-level person for me. I certainly don’t hate her, so the lower tier isn’t an option either, so the middle-tier it is. Makes you wonder though…if we were ever in her bed at night and her condition caused another woman to enter the room, what happens then? 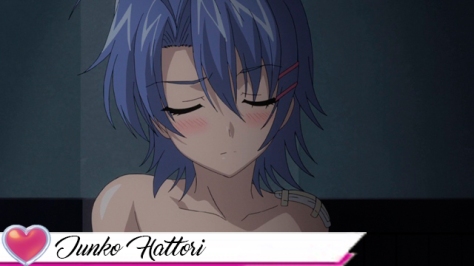 Finishing off this week’s show, is the blue-haired ninja who apparently has no problem leaping out of her window in an open robe and a fundoshi. From Demon King Daimao, it’s Junko Hattori!

From a long line of ninjas in the Hattori clan, Junko starts off as your typical courteous girl who is nice to everyone and has an extremely strong sense for justice. When she first meets the MC, Akuto, she comes off like your normal high school girl, misinterpreting something and beating the shit out of him because of it. Out of any character I have ever seen in anime, no one misinterprets situations at the level of Junko. No matter how good the deed he tries to make, being labelled the next Demon King by the Harry Potter-esque career hat has her constantly trying to kill him or at the very least keep an eye on him so he doesn’t accomplish any evil deeds, deeds he never actually tries to even start.

Outside of her insanity, Junko’s actually a really sweet girl, one who really does just want to be your average nice girl, it’s her desire to save the world that really clouds her judgment at times. When not directly involved with Akuto, around other girls she’s very calm and sweet, sometimes really opening up and showing a much more fun-loving side to her. But then again, there are times where an android suddenly pulls down her swimsuit, revealing her breasts, and then there are times where a red-haired girl jacks off a sea cucumber and it spurts white stuff all over her like it’s a euphemism for something. Oh those two things are in the same episode too, by the way.

Anyways, here’s my call on Junko:

Much like Ren, I really do like Junko, but there are things about her that make me a little hesitant putting her in the top-tier. Most importantly, her tendency to over-analyze situations and misinterpret them really affect my judgment on her. How do I know she won’t do these kinds of things if she comes home and I have company over and it happens to just be another girl? Things could go sour real fast. But I don’t have enough reason to not want her as a friend either. After all, I’m not the future Demon King, I’m sure I’ll get just a little more rope than Akuto does in the anime.