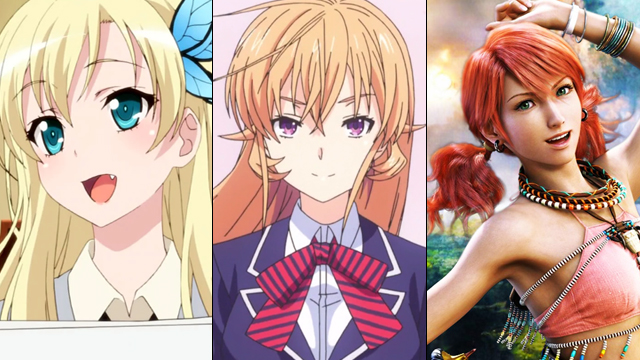 It’s week #47 of Waifu, Friend With Benefits or One-Night Stand! 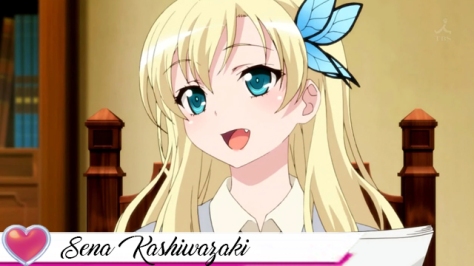 Kicking off this week is the visual novel loving member of the Neighbors Club who wears a butterfly hairpin that I’m amazed never pokes anyone eye out. From Haganai (Boku wa Tomodachi ga Sukunai), it’s Sena Kashiwazaki!

Sena on the surface seems like your classic ordinary school girl, but holy hell is there an arrogant and prideful personality hidden underneath, not that she hides it that well. She generally treats men like servants, almost like she’s the school queen and is more than aware that she does this and doesn’t care. When faced with anyone gutsy enough to counter her, she starts becoming childish in nature, throwing fits and insults all over the place. She also extremely gullible as is seen through Yozora’s many tricks that she plays on her, which leads to more crying. She’s very obsessive, to the point that she’ll beat the shit out of anyone who bashes something she’s into and anything she doesn’t get into she completely ignores, no matter what you say to her. Lastly, she does have a nice side to her, I know it sounds like she’s all bad, but she does care for the few friends she has.

But in the end, this decision is obvious, isn’t it?

She’s awful, guys, there’s no doubt about it. Granted, that’s her character in Haganai, she’s meant to be this horrible young woman that you’re supposed to not like so that when she gets her comeuppance, it’s more than worth it. But in a relationship standpoint, there is absolutely no reason for me to want to try and get with someone who treats men horribly, what’s in it for me? Big boobs? Sorry, but I like smaller boobs, so she literally has nothing to interest me with. 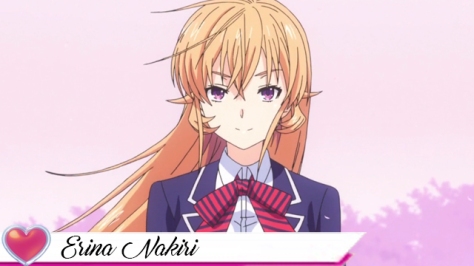 Second up is the main antagonist with the “God’s Tongue”, from Shokugeki no Souma, it’s Erina Nakiri!

For the majority of the anime, Erina acts like your typical pampered rich girl, she’s pretty much got the “holier than thou” attitude going on, only wanting the best and anything less means absolutely nothing to her and shouldn’t exist. She is generally polite to those when she first meets them, but once you annoy her or insult her, that’s it, you’re on the blacklist for all eternity. But in secret, there’s a much softer and downright nerdy side to her that she doesn’t know how to present. She loves reading shojo manga, but because someone always bought them for her, she doesn’t know how to get them on her own and fears it’ll tarnish her image if she’s ever seen anyways.

There’s not much else to say about her, this is pretty much the gist of Erina, so here’s my call on her:

Much like Sena, Erina’s personality really doesn’t go well with me, though she does have a little more positive things about her than Sena. But her cold personality and her lack of common sense and decency the second you start to annoy her, there’s just no way it could work out between us. I’d cook one thing and she’d throw me out on the street. 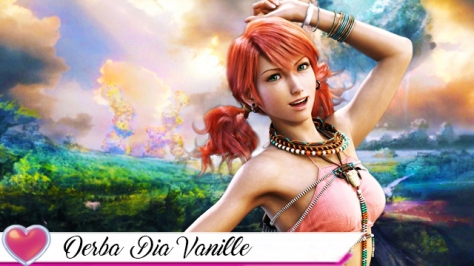 As most people remember her from the games, Vanille is an extremely bubbly and happy personality. Despite all the hardships she’s faced as a L’Cie, she remains very headstrong and upbeat. She does carry a bit of a childish personality to her, but it’s nothing that really bothers me that much, honestly. There’s no one in the game more caring for her friends than Vanille, always trying to help her friend cope with the stress they’re all under, constantly keeping up her happy-go-lucky attitude. This however is a bit of a facade to hide her fear that she clearly has, that’s how strong she is, despite how scared and sad she is, she stays in the brightest spirits. She can be easily moved to tears, however.

Alrighty, here’s my call on Vanille:

I don’t think there’s quite enough there to convince me she’s in the top tier, but her happy-go-lucky personality is certainly more than enough to keep this week from being a one-night stand sweep. It’s nice when there’s a really upbeat character in depressive Japanese games, I really don’t understand why there’s so much hate from fans on Vanille. Maybe they just hate happiness? Can she be a little overbearing? Perhaps, but she’s not doing it to annoy you, she’s doing it because she knows you’re in dire straits and she wants to help you break out of it. If that’s worth hating then I don’t know what to tell ya!