Welcome to Sexy, Beauty or Cutie, where I go through random anime characters through animecharactersdatabase.com and decide whether they best fall into the sexy, beauty, or cutie spectrum when it comes to looks. Now because of this, I’m only selecting anime girls that I actually think look good, which is generally most of them, but this does mean my own personal preferences will keep some girls out. Generally speaking, that just means old women, as in seniors and what anime designs as a “fat girl”, which generally is morbidly obese, as anime is always an over-exaggeration of everything.

So with that being said, let’s hop to it! We’ve got three lovely contestants for you today, let’s bring them out!

Well this is looking like an open and shut case already, doesn’t it? Bright hair, small frame, cute hairpin, giant eyes, always smiling…yup! That sure sounds like a cutie! Yuuna’s got a small frame, a very small frame. She doesn’t appear to have much of a bust either and there really isn’t any part of her body that is openly inviting your attention in the same way anime girls with a fair bust size or a really nice butt would normally draw you into staring at.

Clothing-wise, it’s more of the same thing as well. Her clothes are very conservative, not showing much skin at all. Hell, her school uniform has skirts that go just short of her knees. This is certainly a case where we have an anime girl designed to be super cute and elicit a ton of smiles from the viewers. 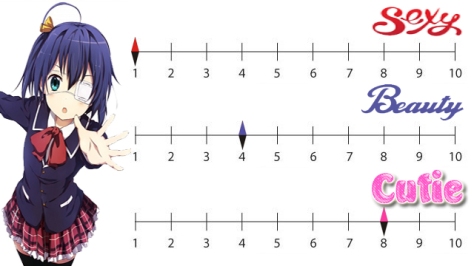 Like I said right at the very start, this was over before it even started. Yuuna is clearly designed to be super cute and super adorable in every way. She’s still pretty, but her entire visual appeal comes from being cute and the idea that you just want to give her a big hug.

Before I even start, the title alone makes me not want to watch it. Why would you hunt the sexiest women in anime?! Because that’s what elves are! Celcia is no exception, just take a gander at the frame before you. There is one hell of a nice body to look at her, however with the hair and her facial expressions and posing, she definitely carries a beautiful form beyond the sexy elvish girl body that we’re used to seeing. Her long blonde hair really does it, a lot of the time, elf girls just have straight blonde hair, in Celcia’s case her hair’s a lot more wavy and designed to give her a sort of elegant flair.

Clothing-wise, the story is the same. She’s hot as hell, as the dress she wears exposes quite a lot of her chest, to the point I’m amazed her breasts manage to stay in there. Anime physics, am I right? But again, just like how her hair and posing gives her a beautiful look, her dress does the same thing. Sure, there’s quite the amount of cleavage there, but she’s also looking like a beautiful goddess in that same dress as well. It’s a tough call, man…

In the end, my decision came just based on her facial expressions in the pictures I’ve seen of her. She’s not inviting you in like a lot of sexier anime girls tend to do, she’s just smiling and looking gorgeous. She’s not motioning for you to come over to her, she’s not leaning forward so you’ve got a straight look down her top, she’s not doing anything to bring the kind of attention. Her body certainly is, but in the end she’s just leaning a little more to the beauty side than anything else.

Wow, I thought it would’ve taken longer to have a repeat show appear on these posts, but apparently not. Much like Michiko, the first character from this series to show up on the less, Vanessa does have that extreme sex appeal going on with her, though unlike Michiko, Vanessa is a little lacking in the bust department. Hell, I almost look at Vanessa as if she was Michiko with a smaller frame and shorter hair. She’s still got that sexy darker skinned body that caught my eye before and she still does look super hot how she is, but with her smaller frame there’s definitely a prettier side to her, whereas Michiko was 100% sex appeal.

Clothing-wise, the couple of outfits I can seem to find her in, Vanessa’s wardrobe does not appear to have any elegance to it. It’s very tomboyish, bordering on kinda cute and sexy at the same time, depending on how you look at it. Though I think with the intentions of showing more skin and having some cleavage and the shorts hanging down enough to get a peek at her bare hips.

While she’s got some cuteness to her, Vanessa much like Michiko is overwhelming sexy in every way. Her body is just fantastic, her clothes show off more than enough skin so you can look at said sexy body. She’s not on the same level as Michiko (hell, very few anime girls are), but she’s no slouch in that sex appeal department either!