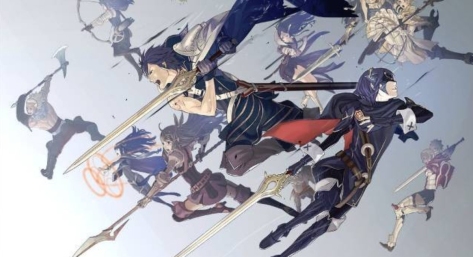 I was sort of into the Fire Emblem series before Awakening, but it was specific to the handheld games. I tried playing Path of Radiance and Radiant Dawn but for whatever reason those didn’t translate very well for me. So my last good experiences with the series was the two GBA releases in North America, Blazing Sword and The Sacred Stones.

So when Fire Emblem: Awakening was released on the 3DS, you bet I was clamouring for it. And I wasn’t disappointed.

The art direction of the new Fire Emblem games are absolutely gorgeous, that first cutscene was absolutely breathtaking to me, it’s hard to believe something that stylish and pretty is on a handheld. It’s like a merging of Nintendo’s cartoonish style with games like Super Mario with the beauty that is anything anime drawn. And when the game incorporates mechanics where you can pair up couples and have them fall in love and bring a child into the world, you better make the ladies look as pretty as possible so we can have our superficial fights over “best girl”!

And that’s where the game hooked me, the cast of characters, especially the women. Yes, that’s likely because that’s what I’m attracted to, so sue me. I’ve played through the game twice, the first time I paired up my character with Lissa. It was large in part due to her being essentially a Princess version of my own girlfriend who also shares the same name with her, minus the extra S. The second time around, I went polar opposite. And who could possibly be that girl? Uou guessed it, the crazy, black magic using raven-haired woman who you’d be smart not to stay around with for very long if you don’t want to become a living experiment: Tharja.

Tharja for me blew the game out of the water in terms of character design. She’s leaps and bounds different than the rest (unless her daughter Noire has one of her “mother transformations” where she becomes just as crazy as Tharja), she looks so much darker than the rest of the playable cast, her demeanor is completely opposite to everyone else, she doesn’t smile (unless it’s one of those crazy smiles), she’s very reserved and she pretty much hides herself. Every other character in the party pretty much thrusts themselves into every scene they’re in, being vibrant, full of life, all that jazz. By doing the complete opposite, Tharja not only somehow fails at hiding herself, but becomes a fan favourite in not just the one game, but the entire series. After all, who would’ve thought from looking at all the female characters in the game that she would be one of the two girls picked for the Summer Bonds DLC to wear a bikini along with Cordelia? You’d think someone like Cherche, Maribelle, Tiki, Anna, hell even Nowi could’ve been picked before Tharja but no, her complete opposite demeanor caused fans to take a liking to her and thus wanting to see her in a situation the complete opposite of what she’s put herself into.

And that’s just one example. Taking one of the guys for example, Gaius and his love of candy while being an assassin is absolutely hysterical, especially in my second playthrough when I paired him with my first wife, Lissa. Chrom’s also a mixture of the proper Prince, but also a sometimes bone-headed but well-meaning young man who just wants to be the hero and save whoever he can. Donnel has his moments, his relationship arc with Panne is probably my favourite one of all. And then going back to the girls, you have Nowi being the tiny 1000 year-old dragon girl who’s as bubbly as you can expect one who looks like her to be. And of course there’s Sully, who’s the token butch girl who made perfect sense to be Chrom’s wife. After all, who’d ever expect the handsome young prince to pick her when he has women like Cordelia, Cherche, Maribelle and more to pick from? It was perfect!

And then there’s the really cool mechanic of having your party members marry and eventually bear a child, who later in the game appears from the future and helps you out. It’s a fantastic idea that allows you to make more choices that actually matter. They often end up being more powerful than their parents as I used Lucina, Kjelle, Severa and Noire in my main party by the end of the game and not even Chrom could hold a candle to either Lucina or Kjelle by the very end. What’s also cool is based on their parents, their appearance slightly changes, particularly in their hair colour. It gives you a visual representation of the choice you made and that’s always fantastic to see.

Now I’ve talked for nearly 1000 words without even mentioning the core gameplay and story. Honestly, that’s because it really didn’t matter much to me. The story was meh at best, there’s not really a moment I can point out as being memorable beyond Lucina first emerging onto the scene as the masked swordsman, Marth, or her finally revealing herself as Chrom’s daughter, sharing a tearful moment. Other than that, the story is nothing too memorable.

I feel about the same way when it comes to the gameplay as well. It’s the typical Fire Emblem style with some additions. Obviously the more casual mode where there’s no permadeath was a change I welcomed with open arms. I’m notoriously bad at Fire Emblem games and strategy games in general, so to be able to not have to worry about resetting for the 20th time is really nice. Cause I ain’t losing Tharja! Having a weapon like the Falchion being infinite made sense to me, I didn’t like having to constantly give the chosen one another steel sword. The pairing system was nice, the addition of dragonstones and beaststones allowed for even more variation in class battles. There was certainly enough to make the game feel fresh and being able to actually grind as well was perfect for me.

Out of all the Fire Emblem games I have played, Awakening is leaps and bounds ahead of the rest. There’s no cast of characters I’ve enjoyed more, the art style is just so beautiful and the new additions to the gameplay sent it over the hill for me.

Now I’ve just gotta get off my ass and play Birthright again. Rinkah’s gonna kill me when I return.