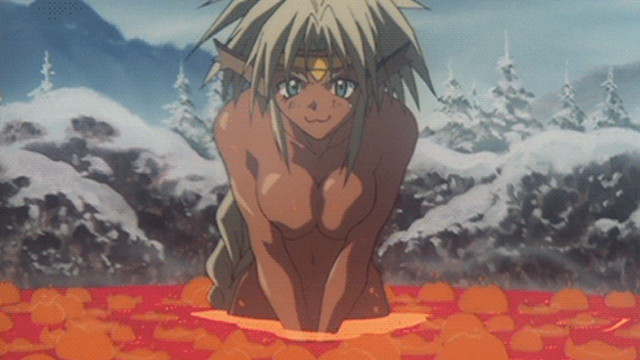 We’re now into our fourth week of the “10 Weeks of Anime Hair Top 10s”. This week we continue on with silver-haired girls. I’m also counting white hair into this as well because they’re pretty close.

Now I’ll lay down the rules I had from last week. The usual rules to these top 10 sexiest girls lists apply, this is a list based on my personal tastes, so depending on what you’re into, my list will be EXTREMELY different to yours. Also, I’m not just opening this up to girls from shows I’ve watched, I’ve opened it up for any and all anime, as I’ve come across a ton of artwork of men and women from shows I’ve yet to watch, so there will be a few names on each of these lists that I’ve never watched the show they are from.

Highschool DxD was one of those shows that even I, a consumer of ecchi content, thought was a bit too much, mostly because it was just ecchi with nothing else of note to offer. And while there are girls like Rias and Akeno who thrust (their breasts) themselves to the front of the pack, Koneko does things the right way, or as close as one can when your a female character in Highschool DxD. She’s super adorable, as her petite frame gives her full advantage on. And as I’ve read and seen screencaps of, her later usage of cat ears and actual cat personality (apparently she goes into “mating season mode” at one point, because of course she would) only increase the cuteness she already offers. Sexy doesn’t have to big giant breasts and constantly thrusting your ass at the camera. 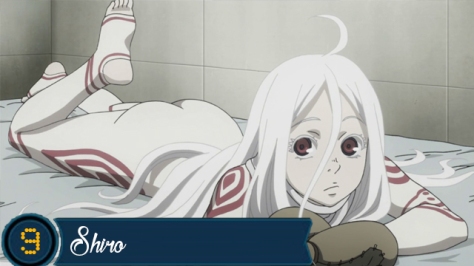 I’ve never heard of Deadman Wonderland, but I have come across pictures of Shino before, though they’re usually littered with blood. But from what I’ve now seen and read about her, it seems like she’s very much a real adorable girl, much like Koneko, except she’s more bubbly and has a very violent, hateful side to her. Regardless, there’s no denying the girl’s beauty, she’s got just enough bust to grab your attention and due to what I’m assuming is a skin-tight outfit, she shows off quite the cute butt. Just uh…stay away from her when the bubbly personality doesn’t exist, otherwise I can’t imagine the end result being very pretty.

A girl from another show I couldn’t watch due to being an ecchi-only show, Alleyne from Queen’s Blade immediately takes an unfair advantage with me in the fact she’s an elf and holy shit she’s a sexy one at that. Scantily clad default outfit? Check. Large but not too large breasts? Check. Perfect ass? Check! Bikini made out of leaves? Huh?! Well that wasn’t on the checklist…*stares*…uh…check check check! Of course too that bikini has the bottoms set as a thong, so she pretty much cheats as much as she can to get on this list. But surprisingly enough, being a sexy elf just isn’t even close to cutting it to get her into the Top 5 with all the lovely ladies on this list.

A show I’ve never watched, but seen a ton of artwork on it as it’s a very screencap worthy show from what I read, Hyakka Ryouran has a ton of beautiful women it, but out of all of them, my attention immediately swung towards Gisen. Eyepatch and tanned skin? Already hitting a fair amount of the checkboxes I have. Of course, when you’re attracted to women, your attention only grows when you watch this girl be sexually provocative not only towards the male MC, but one of the major female characters as well. I think it’s also the setting of the show that really helps Gisen out here, as the reliance on robes just makes it so easy for her to flaunt her body as she appears to do a lot. So she gets a pretty heavily-assisted spot in this Top 10.

One of my personal favourites, you’ve already gotten a taste of how I feel on Fremy from Rokka ~Braves of the Six Flowers~ through Week #9 of my Tuesday “Waifu, FWB or One-Night Stand” articles. Naturally, I cannot deny how a lot of Fremy’s beauty is due to her outfit, which really tries its best to contain her ample bust, but there’s more to her than just that. Her emotionless personality adds a lot onto her, something I’m super into with anime girls, but not only that, she manages to find that perfect mixture of looking drop dead gorgeous and drop dead dangerous. I love this girl, it’s a shame she’s only #6 but there’s still so many hot girls left.

I’ve watched the first three episodes of Freezing until I couldn’t put up with it anymore, but it still depresses me that I never got to get a look at Creo (or Cleo depending on the translation). Why? Because it is such a rarity to not only see a black-skinned girl in anime, but one as gorgeous as Creo. She’s apparently a mostly serious girl with a hidden fun side that she doesn’t pull out very often. But it’s really after seeing the image of her in her underwear with I believe it’s Arnett with her hands in Creo’s bra, groping those perfect breasts, that image sold me on her. Also apparently in a special, she really gets down and dirty with the MC, Bridget, so apparently the girl’s got quite the hidden erotic side. But yeah, super sexy athletic black girl? I’m in!

I’ve never watched Outlaw Star, but I am more than aware of Aisha and the famous hot spring scene where this sexy tanned Ctarl-Ctarl shows off the perfect body she has. The anime ran in 1998, I’m pretty sure I’ve known about this scene for at least a decade now through late-night searching, especially on the 18+ sections of Newgrounds if any of you remember those days. There is no possible way to deny just how sexy Aisha is, even her hair to me is sexy as all hell. Tanned skin, super long hair, unique ears, little bit of markings on her face and of course, just take a look at that body! This is a girl that no matter what you’re doing, you’re stopping to take a look at her if she passes by you, there’s nothing you can do about it. She’s absolutely fucking gorgeous! 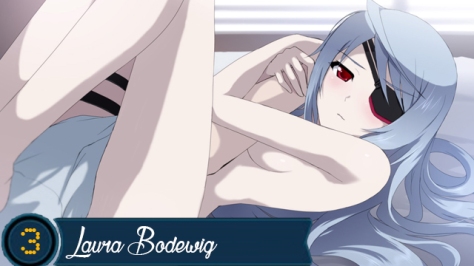 She may not be the sexiest girl to most people in terms of their tastes, but with my love of smaller girls, Laura easily makes this list and gets into the Top 3. Yes, I’m aware in this picture I chose, her hair looks blue, but by the show’s canon, it’s actually silver. Is there a little bit of bias with this pick because Infinite Stratos is my favourite anime? Yes, of course. But she still earns her spot with her various ways of being super cute and super sexy to me. Her Season 1 swimsuit was easily the best of all the girls, she gets naked and puts the MC in an armbar (one of my favourite moments in anime, period) and she gets stuck into cute kitty pajamas with Charlotte. She plays both sides of the plate extremely well, she can be super cute and super sexy and does so over the course of the anime’s two seasons. And that’s all counting towards her spot without even noting more checkboxes like eyepatches and pale skin!

Naturally, I’m referring to “Inner Moka” when the rosary is removed from pink-haired Moka and turns her into a full-on vampire. If you read my Anime Spotlight on Rosario + Vampire, you know that I hate the pink-haired version of Moka because she’s boring and way too sweet, while the silver-haired Inner Moka is an absolutely sexy badass. It’s hard to tell if someone this Moka’s breasts are slightly larger, but she does carry more cleavage when in this form and the long silver hair just adds onto her. But of course, I wouldn’t be doing my job if I didn’t mention my favourite part with her when in Season 2 she tries (and fails miserably) at attempting to court the MC, Tsukune. It’s hilarious as she tries to use the same strategies the other girls do to gain his attention, so having a tough, badass vampire suddenly rubbing her breasts against you because it’s the only way she can think of to gain your affection, that’s pretty damn funny. And given her dimensions, that would be simultaneously hot too.

Given how she was #2 on the list of sexy anime girls I hadn’t watched their respective shows from, it should come as no surprise that Teletha from Full Metal Panic takes the #1 spot here. Everything about her is perfect to me, she’s got a perfect, slim frame, her breasts are right in the middle of where I like them to be sized and her choice in clothes when not in her default uniform is perfect for every scene she’s in. She also gets an extra vote for having one of my favourite anime-based demotivational posters (here) I’ve ever come across. She’s not super adorable as girls like Laura and Koneko are, she’s not super sexy as girls like Creo and Gisen, she’s just adorable and sexy at the same time at all times. I could easily put a big-breasted girl like Creo at the #1 spot of this list, but with my specific tastes, a girl like Teletha who may not have the goods that Creo does, she still beats her in pure beauty and that’s just as sexy to me, so she earns the spot without a doubt.

So that’s the Top 10 silver-haired anime girls, hope you enjoyed it! Don’t forget to put your own favourites and Top 10s in the comments below.

This was the fourth of ten Top 10s with girls of various hair colours.